Located in the Mid-West region of Western Australia, the Yuinmery Copper-Gold project comprises of five granted tenements, two mining and three exploration tenements for a total area of 84.5 km2, of which M57/265 and M57/636 mining tenements and E57/1037 exploration tenement are 100% owned by Empire Resources. 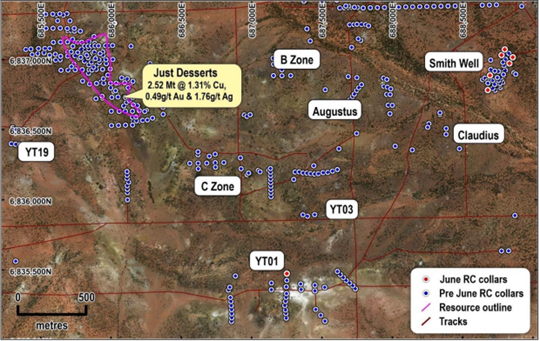 Empire Resources Ltd had commenced exploration in the area during 2006, and a number of RAB, RC and diamond drilling programmes as well as aerial, surface and downhole electromagnetic (EM) surveys have been completed to date at the area.

In July 2020, ERL reported impressive results from the seven reverse circulations (RC) holes for 1,001m at the Yuinmery Copper-Gold Project that was completed in June 2020. The drilling program was aimed at testing the following:

ERL believes that the results received were highly encouraging as drilling progressed to intercept copper-nickel mineralisation at depth and down plunge in the north-east of Smith Well. The Yuinmery project has remained on track to produce excellent exploration results, including

Did you read: Empire Resource’s Investment in NTM Gold Proves Lucrative, Grows From $0.0325 to ~$0.09 Within a Year

At YT01, encouraging results were received showing broad zone of Cu-Ni-PGM mineralisation in RC hole YRC20-28 and the presence of elevated Pd and Pt values encountered towards the bottom of the hole. ERL is presently engaged in re-assaying the latest drilling to aid in recognising the geological setting of YT01 and its consequences for mineralisation.

ERL believes that further exploration is required at the Smith Well Prospect for a definitive assessment of the area.

Funds Raised For Development of Projects

In early August 2020, ERL further completed a placement to raise around $1.3 million before costs through the issue of approximately 108 million new fully paid ordinary shares at an issue price of A$0.012 per share to investors.

There had been strong demand from investors witnessed in capital raising. The funds raised from the placement are anticipated to be utilised for financing the exploration drilling at the Yuinmery Project, the Penny’s Gold Project near Kalgoorlie and working capital requirements.

ERL is optimistic that there lies a significant opportunity for growth represented by the recent encouraging Cu-Ni-PGM results returned from drilling at Yuinmery, along with highly prospective gold targets at Penny’s in a situation where the gold price is at an all-time high.