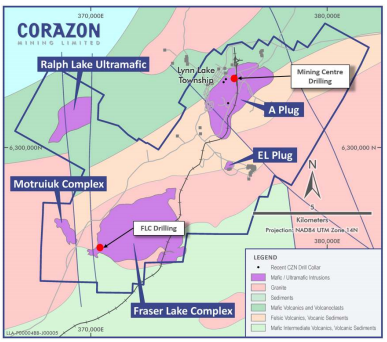 The drilling has commenced at the drill hole FLC2020- 22 and is expected to be complete in the next 10 days. Corazon plans to schedule further drilling to test this target area upon receiving the assay results of the drilling program.

The drilling at the first hole (FLC2020- 22) had commenced earlier during the June quarter, and reached the top of the targeted anomaly at a downhole depth of 523.4 metres, almost 400 metres below the surface.

The magnetic anomaly targeted at the current drilling hole lies flat at the basal contact of the intrusive system. The intrusive system is interpreted to be located between 450 and 500 metres below the surface.

Drilling at the Fraser lake complex was paused due to unstable surface conditions due to the northern hemisphere spring melt leading to high water levels. Corazon had been awaiting the recommencement upon the lowering of water level and improvement of conditions.

The station at the project site have stabilised now, and Corazon is extremely excited and pleased to resume drilling at Lynn Lake.

The drilling activity and the successive assay results focussing on superficial mineralisation at the “A Orebody” was earlier completed and observed high-grade intercept of the Nickel sulphide mineralisation. At Fraser Lake complex, Corazon focussed on the substantial new nickel-sulphide targets identified from the previous Magnetic Vector Inversion (MVI) geophysical method.

Must Read: Corazon Updates on Activities from the June Quarter, Drilling program at Lynn Lake to Resume Shortly

Corazon had been using the advanced geophysical technique of MVI for identifying potential mineralisation targets at least 600 metres defining the priority drilling targets at the Fraser Lake Complex.