Lithium Australia's progress in maintaining operations during an uncertain environment

On 3 April 2020, LIT announced an initial plan to deal with the pandemic. Now, it has released an update on the company’s progress in managing operations in such an unpredictable environment unfolding on account of Covid-19.

How is LIT sailing through the crisis? Further measures announced

LIT has witnessed a resurgence in both capital and commodity markets, and recently, the demand for many commodities in the battery-minerals space has recovered robustly. The prices for copper, nickel, and steel have increased, but the lithium and cobalt markets are expected to take a longer time to bounce back. However, in medium to long term, an increase in demand for all battery minerals is expected. 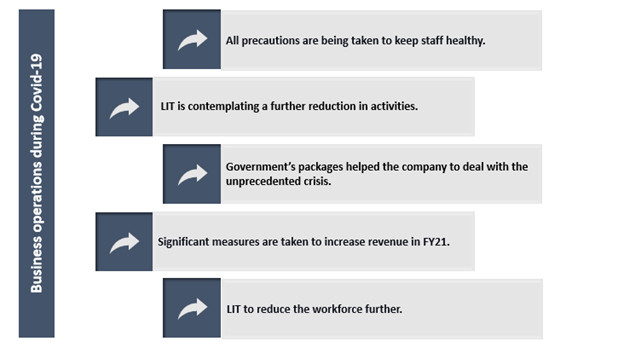 Maintaining safety: Though the company is based in Perth, Western Australia, where there is no community transfer reported and the state has only a few cases of infection. The Group continues to observe the Covid-19 impact on business operations. Most of the employees are doing work from home; however, now they have the choice to resume work from the office. Moreover, all employees strictly are following proper hygiene and social distancing.

State borders are closed, and maritime borders and international air traffic are still strictly controlled. With the resurgence of cases in other parts of the country, easing of restriction is not expected any time soon.

These travel restrictions are particularly hard on some of the Group's units.

Pandemic's impact on business and markets: The world is still under the grip of the pandemic. Australia where it seemed that the spread was under control, the community transfer of the virus in Melbourne, Victoria, and Sydney is discouraging for businesses.

LIT has taken significant steps to refocus on the revenue-generating battery recycling and battery sales businesses, which it expects to provide significant revenue during FY21. The company believes that these measures would drive value for shareholders.

The company will keep its expenditures under control for FY21, and also will slightly reduce the workforce.

Envirostream (90 per cent subsidiary of LIT) is the global leader in battery recycling, it recovers up to 90 per cent of recyclable battery components where other operators recover less than 65 per cent by weight.

It collects used batteries from around Australia and shreds and separates out the components at its recycling factory in Melbourne (Victoria). It can recover almost all the components of the used lithium-ion batteries (LIBs) comprising cobalt, nickel, lithium and manganese in concentrate, also copper, aluminium and steel.

Lithium Australia and Envirostream, together have the technology to recover most of the metals within used nickel-metal-hydride and alkaline batteries, along with LIBs, to be used in generating new battery materials.

Used batteries are a threat to the environment: Most of the used LIBs end up in landfill, which is extremely harmful to the environment. In Australia, Envirostream is the only recycler aiming to reduce this problem.

Recently, Environstream has added more circuits at its plant to improve the recovery of lithium, cobalt and nickel and produce more marketable copper and aluminium streams.

Other processes that continue during the lockdown are Battery recycling R&D, programmes for the recycling of LIB electrolytes, and automated battery sorting.

The Australian Battery Stewardship Council is planning to offer a nationwide system for recovering used battery in FY21. As per this scheme, a tax will be charged during battery sell. The amount collected through this tax will be used to support battery collection and recycling. After the scheme comes into effect, the volume of used batteries collection should grow significantly.

Envirostream has inked non-disclosure contracts with various potential partners for settling recycling facilities in Australia and offshore. Revenue growth is expected with the Melbourne operation transitioning to positive cash flow during the second half of FY21.

Soluna Au is 50 per cent owned by Lithium Australia. The company is formed to market LIB-based energy-storage systems for residential and industrial uses.

During summer, demand surges due to increased use of airconditioning. Grid demand can be reduced by extended use of energy storage systems. The state government is encouraging installation of such systems to maintain the balance of energy distributed through grids.

Soluna Au achieved a significant milestone when Soluna Au's products got approved for grid connection by the Clean Energy Council of Australia. It is particularly extremely useful for Western Australia, where distribution grid balance is hampered by a large amount of installed solar generation capacity and lack of available power storage.

The global supply chains disrupted during April and May are now recovered at almost normal levels. The company has products in stock, and will be resupplied regularly to avoid any future disruption.

The company is anticipating robust demand for its energy-storage systems by FY21 and also a positive cash-flow from the December quarter.

VSPC's commercialisation plans are temporarily on hold due to Covid-19

VSPC produced cathode powders are being tested in industrial plants in China and Japan. It has several agreements to commercialise the production of cathode products, but due to Covid 19 conditions, the commercialisation plans are temporarily on hold.

It remains active in research programmes, some of which are partly funded by federal government grants, for the time being. Such programmes include:

Previously,  Lithium Australia maintained an extensive exploration portfolio which is now reduced to reduce the expenditure. In Australia, prospective tenure is retained, but the exploration at Sadisdorf (Germany) is on hold, and LIT dropped its involvement in a Mexican project.