A small cap healthcare company, whose stock has zoomed up 7x since the March lows, has embarked upon the race to undertake initial study of its drug candidates RECCE® 327 and RECCE® 529. The company’s two leading candidates are being tested against SARS-CoV-2, the causative agent of COVID-19.

RECCE® 327, the patented lead candidate has been chosen for a SARS-CoV-2 Antiviral Screening Program conducted by CSIRO and The Peter Doherty Institute for Infection and Immunology (Doherty Institute). Further, RECCE® 327 and RECCE® 529 are to be tested against SARS-CoV-2 in an international study led by Path BioAnalytics undertaken in a laboratory at a leading academic institution in the U.S.

RCE operates as a drug manufacturer and marketer focused on treating a wider range of bacteria and viruses. The company has three candidates in its pipeline RECCE® 327, RECCE® 529, and RECCE® 435. 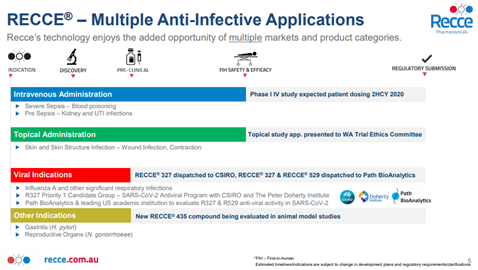 The company is on the quest to achieve technical leadership by protecting its product portfolio and manufacturing by securing wholly owned patents and intellectual property encompassing composition of matter, therapeutic applications, and manufacturing.

The company uses inexpensive raw materials that are abundantly available to scale up manufacturing cost-effectively.

RCE boasts of a strong cash position. The Company ended the quarter with a cash balance of $2.6 million.

Cash outflows from operations were $4.12 million with investment in research and development recorded at $3.6 million, the primary source of expenditure with staff costs and administration and corporate costs at $0.35 million and $1.25 million respectively. The Company currently has no long term debt.

COVID-19 -A Battle to be Collectively Won

Australia is experiencing the second wave of coronavirus with 464 new cases reported in last 23 hours 7,942 estimated active cases with around 632 hospitalized (as on 7 Aug 2020). Unless a proven medical treatment option is available, the situation is expected to remain grave.

Companies that have any semblance to fight COVID-19 and help the global community cross the bridge are closely tracked by the stock market participants. RCE’s products RECCE®327 and RECCE® 529 have gained attention as the company is undertaking initial study to identify any potential therapeutic effect against SARS-CoV-2, the virus responsible for ‘COVID-19’ disease.

RECCE® 529 is being developed to treat viral infections. The company recently launched a new RECCE® 529 antiviral compound with patent lodged to exhibit higher efficacy in treating Viral cells. The compound has been dispatched to the USA for an international COVID-19 study by Path BioAnalytics. The patent, if secured, will be valied untill 2040.

The lead candidate RECCE®327 is an abroad-spectrum antibiotic formulated using synthetic polymer technology to treat bacterial sepsis (blood poisoning) and other bacterial infections, including superbugs. Key differentiators of the leading candidate are

The QIDP designation fast tracks RECCE® 327 through the FDA regulatory review process so it can be available to treat patients with serious or life-threatening conditions sooner.

After repetitive use, the commercial antibiotic loses activity; however, RECCE® 327 does not lose effectiveness even after 25 repeats

RECCE® 327 has been chosen for a SARS-CoV-2 Antiviral Screening Program conducted by CSIRO and The Peter Doherty Institute for Infection and Immunology (Doherty Institute).

Current achievements and updates on RECCE® 327

RCE has revealed positive oral data on New RECCE® 435 against Helicobacter pylori (H. pylori) bacteria isolated from a patient with a duodenal ulcer compared to control vehicle in independent study model in rats against Helicobacter Pylori in Animal Model. The company is in discussion with world leading H. pylori experts to assess commercial pathway.

RCE has promising drug candidates in its product pipeline and has established a manufacturing process that can facilitate quick production as soon as commercialization phase is reached. The company is focusing on bacterial infections and two lead are tested for Sars-COV-2, pulling the market participants interest towards this stock. However, caution is called for as these studies are still in the preliminary stage.