Growth stocks are those stocks with the capability to beat the overall market because of future potential. The companies under the growth stocks could either be a small-cap or large-cap.

On the other hand, value stocks are those stocks that are trading at a price below their actual worth, hence provides a better return. These stocks belong to majorly established companies

In this article, we have cherry-picked a few famous names under the growth and value stocks during the present times and look at the recent development of these stocks.

Telstra Corporation is amongst the leading telecom players in the world that offer a broader range of services from programmable networks to cloud solutions.

On 07 July 2020, Telstra announced its plans to expand its network infrastructure in the US by increasing the bandwidth capacity on its trans-Pacific subsea cables. It would also be opening two new points-of-presence (PoPs) in the region. TLS also has plans to upgrade many in-country circuits to improve network resiliency and diversity.

As per Nicholas Collins, Telstra Americas President, the company would be increasing the bandwidth by more than 1.5 terabytes in the upcoming six months. The new Point of presence would be in places like Hillsboro, Oregon and Los Angeles, California. The in-country circuits would be upgraded from 10G transit services to 100G.

The company has also recently launched PoPs in Atlanta, Seattle, Denver and Dallas and a new sales office in Chicago. With this, the total PoPs in the US has reached 21.

Xero Limited delivers online accounting software to small business. On 8 July 2020, the company released its plans on which it is presently working. Let us have a look at them.

To know more about other achievements, click the below link:

Lendlease Group is a global property & infrastructure group that has expertise in forming cities & creating secure and connected communities.

On 1 July 2020, Lendlease Group released its FY2020 unaudited Results update. The company expects its core profit after tax to range in between A$50 million to A$150 million, influenced by COVID-19 impact on the Group. This comprises the effect of cuts in investment valuations in H2 FY2020 in the range A$130 million - A$160 million, after tax.

The total unaudited statutory loss after tax would be likely to lie between A$230 million and A$340 million.

Presently, the Group has entered FY2021 and is in a strong position. The company has executed deals to launch a development joint venture with Mitsubishi Estate. With this, Mitsubishi would acquire 25% interest in the delivery of the first residential tower at One Sydney Harbour, Barangaroo. This is projected to contribute ~ A$100 million PAT in FY2021.

PointsBet Holdings Limited announced that its subsidiary PointsBet USA, Inc has entered an agreement with BetMakers Technology Group Limited (ASX:BET). Under the agreement, PointsBet would provide Fixed Odds betting on horseracing in New Jersey which would depend on all required regulatory and other approvals.

BetMakers on 5 February 2020 announced that it secured a 10-year agreement with New Jersey Thoroughbred Horsemen Association and Darby Development LLC to deliver and manage Fixed Odds horseracing into New Jersey.

Under this deal, the company would offer Fixed Odds betting to New Jersey clients on all Monmouth Park race meetings, aiming to expand its offering into New Jersey to include races & vision from other domestic and international jurisdictions.

The deal also allows PBH to offer Fixed Odds betting on horse racing to customers in other states in the US where PointsBet has market access, via BET. 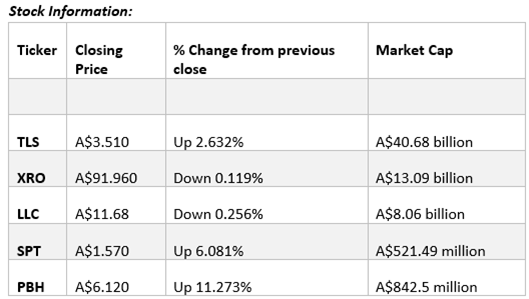