Technology and the Healthcare sector are amongst the best performing sectors amid the coronavirus crisis. Companies under these two sectors have been in the spotlight and preferred by the market players who, in turn, supported the sector indices to surge significantly on the ASX.

When the country was in lockdown and people were compelled to stay at home due to the restriction imposed by the government, technology played a critical role in ensuring there was a minimal disruption in business activities by offering varied products and services.

In this backdrop, let’s look at four stocks from the technology sector and see their recent update and position of the stock by the market closure on 2 July 2020.

On 2 July 2020, Dicker Data Limited updated on its 1H FY2020 revenue for the period ended 30 June 2020. The Company further expects a profit during the profit.

The company recently raised A$65 million capital via placement and share purchase plan. DDR has plans to use these proceeds to partially fund its new distribution centre, invest in DDFS product and provide balance sheet flexibility and broaden Dicker Data's share register.

DDR shares have delivered a return of 3.55% in the last six months. However, in the previous three months, the shares have given a decent performance of ~19%.

By the market closure, the shares improved by 9% and settled at A$7.630 and are placed above its average 52 weeks price.

Xero Limited is amongst the fastest growing SaaS companies worldwide. It provides cloud-based accounting software that connects people with the correct numbers anytime, anywhere, on any device.

On 1 July 2020, Xero revealed anonymised and aggregated customer data which showed that New Zealand small business revenue showed improvement in their revenue in May 2020 after a drop in April 2020 because of the lockdown in the country. However, the value dropped 22% as compared to the previous year. 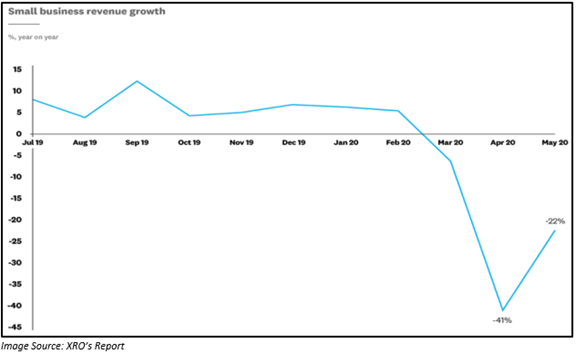 On 30 June 2020, Xero announced that it was providing small businesses in North America with access to resources, information, and product offerings to assist them in this challenging economic environment caused by COVID-19 crisis. Further, these resources would be made available via Microsoft Small and Medium Business COVID-19 resource centre.

There were other developments, as well. Click the below links to know more.

In the last six months, XRO shares have delivered a return of ~14% and ~31% in the previous three months. By the market closure, the shares settled at A$91.800, up 1.101% from the last close. Presently, the shares have reached near its 52-week high price.

NEXTDC Limited is the most trusted data centre provider in Australia whose shares grew significantly by ~ 64%. Some of its achievements support growth during the period.

Contracted commitments at its NSW:

On 1 July 2020, the Company advised that the contracted commitments at its NSW data centre facilities increased by 4MW, to over 36MW.

Contracted customer commitments along with the expansion option, are advancing 60MW. The revenue recognition is projected to start during FY2021 post the completion and commissioning of the associated data halls.

ALSO READ: Are these the Top 6 Stocks to look at this Season: KGN, EML, NXT, ANN, TLS, BLD

On 2 July 2020, Bigtincan Holdings Limited announced that it secured a A$1.8 million contract with Red Bull for the implementation of the Bigtincan software. The duration of the agreement is 30 months, and there is a provision to extend the contract for another 60 months.

Besides, the Company was included in the All Ordinary Indices in the quarterly rebalance announced by S&P Dow Jones Indices on 12 June 2020.

The Company, on 21 May 2020, had announced that it received for its A$35 million institutional placement at A$0.67 per New Share. On 19 June 2020, it completed its share purchase plan as well and received strong support from eligible shareholders. The Directors exercised their discretion to boost the size of the SPP offer to circa A$7.5 million.

In the last six months, BTH shares have provided a return of 10.49%. However, significant growth of ~61% was seen in the previous three months. By the market closure, the shares settled at A$0.795, up 0.633% from the previous close. Presently the shares have surpassed the average 52 weeks price.