Australian explorer, Horizon Minerals Limited (ASX: HRZ) remained all charged-up with noteworthy advancements in different projects, together summing up an impressive June quarter for the yellow-metal explorer. Heedless of unsurmountable disruptions elicited due to the pandemic, the notable accomplishments of the company bear testimony to the carefully crafted strategies that were implemented in a planned manner.

The ardent focus of Horizon on the gold explorations in the Kalgoorlie and Coolgardie regions of Western Australia seems to stimulate its exploration ventures and strategic developments. The gold-centric objectives being the anchor to the exploration activities has prompted the divestment of the Nanadie Well Copper Project, stationed near Meekatharra in the Murchison District of Western Australia, subsequent to the quarter-end. Notably, the Company reached an agreement with the Murchison-based copper explorer, Cyprium Metals Ltd for divesting its 100% owned Nanadie Well project for $1.5M in cash and shares.

Furthermore, to successfully sail through the crisis, Horizon Minerals has put in place prudent safety and financial measures for ensuring the welfare of staff and local community and strengthening the Company’s balance sheet. The Company has planned its drilling operations at different projects on the back of positive cash flow generation from the Boorara mine development in the second half of 2020.

Let us deep dive to explore the significant advancements and key undertakings that characterised June Quarter for the Company.

Boorara Gold Mine: Mine Development and Operations

The significant developments at the Company’s 100% owned Boorara gold mine situated 10 kilometres east of WA goldfields’ Kalgoorlie-Boulder were witnessed during the June Quarter. The operations received Board Approval alongside the project financing and necessary statutory approvals, which were successfully completed, with mining currently underway at Boorara Gold mine.

The Company awarded the mining and haulage contracts to Hampton Transport Services Pty Ltd for completing the work. A toll milling agreement is in effect for treating ore at Golden Mile Milling’s 1Mtpa Lakewood Mill, which is situated 7 kilometres to Boorara’s West. The Boorara mine development follows the completion of a positive Feasibility Study (FS).

The first stage of mine development is targeted to generate cash in the current high Australian gold price scenario while also demonstrating the potential for tonnage and grade uplift from infill drilling prior to the evaluation of larger-scale development and Mineral Resource update.

Up until now, a total movement of 287k BCM has been mined with ~61k tonnes of oxide and transitional ore mined at a fully diluted grade of 1.4g/t Au. It is in line with reserve model estimates for the pits’ upper oxide areas. The significant free dig material volume mined to date reduces drill, and blast costs minimise dilution and upgrade mine productivity.

First ore treatment campaign scheduled for mid-July 2020 will treat ~25k tonnes of ore over two weeks from the Regal East pit allowing the detailed mine to mill grade reconciliations.

With the detailed mapping ongoing as a part of the consolidated Feasibility Study, Horizon Minerals expects its first gold production and revenue in July 2020, with production on a campaign basis progressing through to January 2021.

During the Quarter, the Company received high-grade drilling results from the second phase of drilling at the Rose Hill gold project, sitting 0.5 kilometres east of Coolgardie and 35 kilometres west of Kalgoorlie

The three drill holes consisted of RC pre-collars and diamond HQ core, assisting in the creation of ‘underground’ high-grade resource, and providing opportunity to view the Rose Hill orebody. The Company plans on drilling including completion of Deep RC and diamond drilling in selected areas along with the confirmatory metallurgical and processing testwork

The updated Mineral Resource estimate is slated for completion and release in the September Quarter 2020.

Furthermore, Horizon has also scheduled the initial drilling at the adjacent Brilliant North prospect (M15/1204), which will target shallow mineralisation within 30m of surface, which can undergo open pit mining and result in a separate JORC compliant resource

The success of pre-concentration and downstream test work earlier has allowed advancements to simulated production tests, which are currently being conducted with semi-industrial scale samples are nearing completion. 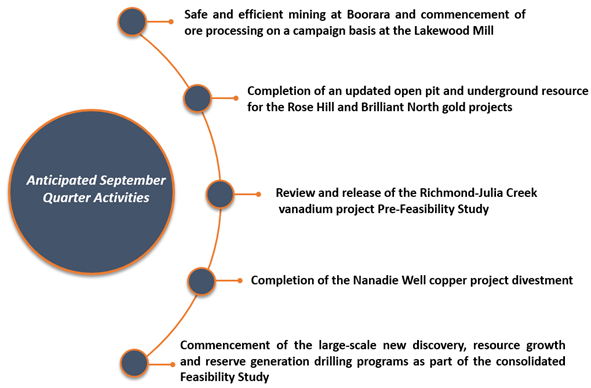