The company entered into a Sale and Purchase Agreement with Cyprium Metals Limited (ASX: CYM) for $1.5 million in cash and shares to divest 100% of its Nanadie Well Copper Project. Notably, Horizon entirely took over the reins of the Nanadie Well following the withdrawal of its then joint venture partner in the December quarter 2019. The Nanadie Well Copper Project is located approximately 75 kilometres to the east of Cyprium’s Hollandaire copper deposits

Remarking on the Nanadie Well divestment, Managing Director Mr Jon Price indicated that the core focus of Horizon remains firmly fixated upon the development of a “stand-alone gold project in the Kalgoorlie and Coolgardie regions”. He believed that this divestment would provide backing to the gold-focused objective of the company. Meanwhile, exposure to both Nanadie Well and Cyprium’s current copper projects would be retained in the Murchison district as a substantial shareholder.

Mr Price stated that the region is witnessing an active exploration by the excellent technical team of Cyprium and Horizon looks forwards to additional accomplishments at Nanadie Well as it continues to advance its gold business.

Horizon Minerals signed an agreement with Cyprium Metals which involves divestment of 100% of its exploration licence E51/1040 and Mining License M51/887. This covering 45km2 is part of a northwest-trending belt of Archean mafic and metasedimentary units, which have demonstrated perspectivity for magmatic copper-nickel-PGE mineralisation.

Under the Agreement, Cyprium will pay $1.5 million in cash and shares being priced on a 20-day volume-weighted average price basis. 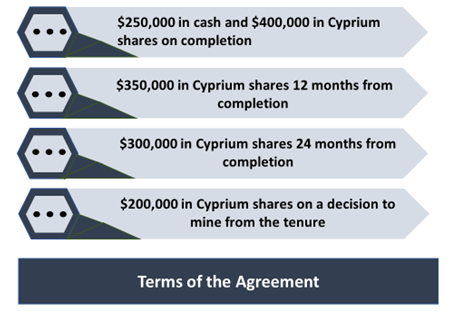 Completion is anticipated in the next four weeks, subject to standard conditions precedent for a transaction of this nature which incorporates Ministerial consent, any third-party assignments along with the provision of mining information.

As the company proceeds with the divestment of the Nanadie Well, it lately acknowledged robust developments at its Gold Oriented Projects.

Horizon Minerals strategic gold exploration endeavours catalysed its operations at Boorara gold mine, where Mining and ore haulage progressing ahead of schedule. Mining on 6 May 2020 commenced at Boorara, located 10 kilometres east of Kalgoorlie-Boulder in the goldfields of Western Australia.

Horizon Minerals June Update indicated total material movement to date of 232,000 BCM, which is 22% beyond the plan, with the free dig material portion contained in both the Regal East and Regal West pits, which exceeds the expectations. Approximately 42k tonnes of oxide and transitional ore, which is mined at a fully diluted grade of 1.4g/t Au sits in line with the reserve model estimates intended for the pits’ upper areas.

A higher than budgeted free dig material volume mined reduces drill and blast costs along with minimising dilution and enhancing mine productivity.

As a component of the mine optimisation and reserve generation studies, core samples for confirmatory testwork have provided geotechnical information and metallurgical samples