First Au to commence drilling at Gimlet in August, Testing extension of gold mineralisation at depth

First Au Limited (ASX:FAU), the prominent gold and base metals explorer, is approaching the commencement of the drilling program at the wholly owned Gimlet gold project in the neighbourhood of Kalgoorlie goldfields in Western Australia. 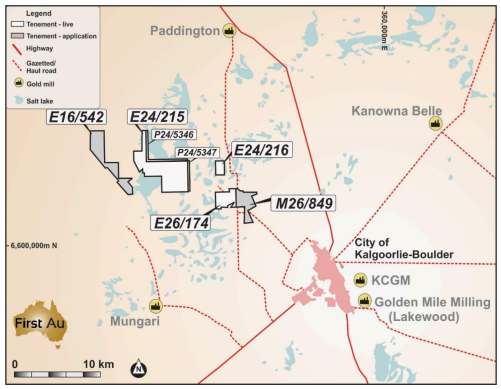 Gimlet is interpreted to be an Archean orogenic gold project associated to NNW trending Abattoir shear zone. The Gimlet project and the adjacent Horizon Minerals Limited’s (ASX:HRZ) Teal gold project together hosts the mineralisation structure along the 2.7 kilometre strike.

Must Read: First Au to advance on Gimlet Exploration after Successful SPP

Diamond Drilling to commence in August to test extensions of mineralisation

While the pandemic restrictions have delayed the on-site exploration activities during the previous quarter, First Au plans to commence a drilling program in August to test additional extensions of the prospective gold mineralisation at the Gimlet gold project.

The additional gold mineralisation extensions will be beneficial to identify further mineral resources at the Gimlet project. As per the 2019 estimations, the Gimlet gold project holds a JORC compliant mineral resources of ~69,000 ounces of Gold contained in 642,000 tonnes ores with a resource grade of 3.3 g/t Au.

First Au has been evaluating the potential for the early mining of oxide and upper transitional ore via toll treatments at the available gold processing plants in the neighbourhood. The Gimlet deposit is located at close hauling distance to the existing gold beneficiation plants including Norton Goldfileds’ Paddington and Golden Mile Milling’s Lakewood.

Historical toll treatment operations at Gimlet – Between 2016 and 2018, Horizon processed almost 75,000 tonnes of oxide ore similar to Gimlet with a grade of 3.2 g/t Gold at the Paddington and Lakewood facilities to produce 22,000 ounces of gold at a cash cost of $1,100 per ounce.

Opportunity for First Au: First Au has been proactively assessing the opportunity. The explorer was also awarded a government grant to co-fund the deep diamond drilling with a vertical depth of 450 to 500 metres to test the extension of the mineralisation at depth.

Utilising the drilling samples from the 2018 and 2019 programs, the initial metallurgical studies resulted in an overall recovery of 98% Gold for the oxide material, while the upper transitional ores resulted in the recovery of 78% Au. Both oxide and non-transitional ores are amenable to the neighbouring toll treatment plans with further metallurgical test work on diamond drilling coring samples anticipated in the future.

In case of the early mining option, the substantial cash flow from the toll treatment of oxide and non-transitional ores could be reinvested in case extensive gold mineralisation is encountered in the deeper sections during the government co-funded diamond drilling program.