The pandemic continues to take a heavy toll on the lives of people worldwide. Owing to the uncertainty created by COVID-19, numerous products were stockpiled by the individuals worldwide, which were deemed essential.

Infant formula or baby milk is one such product that garnered market’s attention, and experienced sored demand from households with little babies to be fed. People indulged in panic buying to stock up their respective pantries amid looming uncertainty surrounding the supply of goods.

Infant formula players such as a2 Milk and Bubs have made investors hooked to them, as they have strong product portfolios well-positioned to leverage the burgeoning market.

Let us appraise ourselves with two of the following ASX-listed consumer staples sector players in Australia and their recent developments.

The a2 Milk Company Limited (ASX:A2M)

The a2 Milk Company Limited is a premium branded nutritional dairy entity offering products that are free of a protein called beta casein A1. A2M has distribution channels across Australia, China, New Zealand, Hong Kong, Singapore, the US, and the UK.

As per an announcement of last month, S&P Dow Jones Indices made a change in S&P/ASX indices, effective at the beginning of the trade on 22 June 2020, A2M was added in the illustrious S&P/ASX 50 Index.

A2M noted robust revenue growth in the quarter ending 31 March 2020 (Q3 FY20) in all addressable regions, specifically with respect to the infant nutrition products sold in Chinese, as well as Australian market.

Furthermore, solid growth in the top-line demonstrated the changing purchase behaviour of numerous consumers amid the pandemic, and an amplified pantry stocking of the Company’s products primarily through reseller and online channels.

Although outlook for both revenue and earnings remained uncertain due to the potential impact of the pandemic on supply chains and consumer demand in A2M’s core markets, the Company was expecting continuing revenue growth throughout its key regions, with aid from the enlarged marketing activity in the US and Chinese regions.

For FY20, the Group expects:

A2M’s stock has appreciated by over 24 times in the past five years!

Did you read; 6 ASX Stocks creating a buzz! 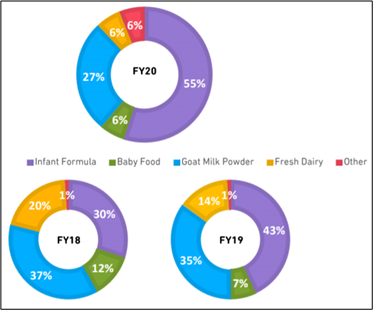 BUB anticipates continued strengthened growth in FY21 through enhanced revenue retailers; expects further enhancement in its gross margin by optimised product mix and improved value chain. It also aims at realising profitability at the normalised level of EBITDA in FY21.

On 27 July 2020, former Miss Universe and Television celebrity Jennifer Hawkins was introduced as the Global Brand Ambassador of the Company.

Furthermore, BUB inked an agreement with Chemist Warehouse to enter the vitamin and mineral supplement category, with the launch of its Vita Bubs® infant and children’s VMS range.

BUB has generated a total return of 1.11 per cent, and -2.15 per cent in last three months and six months, respectively.