Committed to building strong customer relationships that result in positive outcomes for all shareholders, SND has a 220+ strong permanent work force that works around the Company’s values of safety, integrity, innovation, teamwork and leadership.

On the corporate end, Saunders recently delivered positive results for the first half of FY20, demonstrating its renewed operating model and practical execution of the corporate strategy.

Let us cast an eye over few of SND’s recent contract wins.

For a detailed look, do read Saunders International Strengthens Orderbook With Major Construction Contract Amid COVID 19

Pertaining to a new 60ML water reservoir for Sydney Water in Liverpool, NSW, SND will undertake detailed design, civil foundation, construction of a new welded steel reservoir (80m diameter x 13m high), electrical & instrumentation and commissioning works. The mobilisation to site was expected in Q120 with the work to continue over the second half of FY20 and FY21.

For Rio Tinto’s Yarwun alumina refinery near Gladstone, Queensland, SND is set to design, supply, fabricate and perform installation to repair up to 16 precipitator tanks. Mobilisation to site has begun with the work to continue over two years, subject to relevant approvals for the second separable portion to be received by Rio Tinto.

The contract in the mining sector marks SND’s ability to secure new streams of recurring revenue. It also illustrates the continued strength of the Company’s relationships across a diversified blue-chip client base, wide capabilities and ability to deliver innovative solutions to clients across its targeted sectors.

SND will be delivering four new tanks across two sites in NSW and in the Northern Territory. The scope of work for the project in NSW includes design supply and installation of two new tanks, including fire systems and electricals. Mobilisation to site will commence in H2FY20 with the work due for completion by H1FY21.

In the Northern Territory project, SND is subcontracted through the Nova Nacap JV to construct two cut and cover fuel storage tanks for the Naval Facilities Engineering Command Pacific. These tanks have an 8-million litre capacity with a column-supported flat roof each. Mobilisation to site will commence in H1FY21 with the project scheduled for completion in 2022. 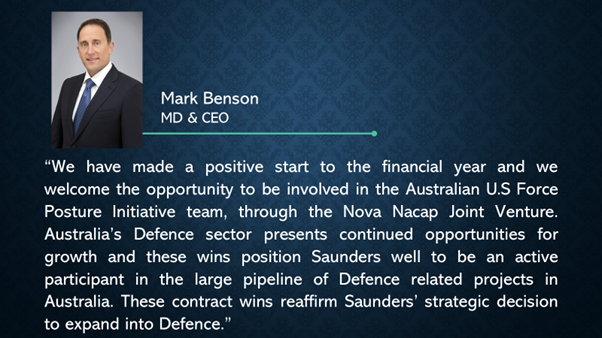 SND commenced Early Contractor Involvement (ECI) for the design and construction of three tanks for an NSW Terminal Expansion project. The ECI work will include design, procurement and fabrication of steel and early civil works. Construction work scheduled to begin in Q120 will continue through FY21 (pending full project approval).

Zinfra Pty Limited- Design and construction of a 28 megalitre tank for recycled water storage in Cranbourne West, Victoria, under a contract valued at $1.4 million

Lendlease Building Pty Limited- The second contract awarded to SND by Lendlease Building includes design supply and installation of two new tanks, including the coordination of the interfacing trades covering fire systems and electrical subcontractors, with the contract valued at $5.2 million

JHCPBG JV- Supply of precast components to the Sydney Metro project for $11.1 million

John Holland Rail- Construction of a single span 27m-long bridge over the North Coast rail line at Martins Creek to replace the life expired existing timber bridge under a contract valued at $2.5 million

BGC Contracting Pty Ltd- Construction of five bridges on the section south of Yambacontr for $4.1 million

Dungog Shire Council- Design and construction of 2 large timber bridge replacements under a contract worth $2.5 million

BP Bulwer Island- Civil and mechanical works, valued at $15.0 million. SND is the preferred contractor for a further $11.5m of works on this site.

Backed by contracts flowing in, a record orderbook and strengthening pipeline of new opportunities, SND seems to be on a growth trajectory, ready to implement strategic initiatives and deliver recent project wins.