Australia-India 'groundbreaking' trade deal: How will it benefit both nations?

After toiling on the idea for years, Australia and India have finally signed the Australia-India Economic Cooperation and Trade Agreement (AI ECTA). The trade deal is set to strengthen the relationship between both countries while creating new opportunities for workers and businesses. In fact, the deal is a momentous event in the history of both Australia and India.

The majorly export-focused deal is set to make Australian exports to India cheaper with the reduction in export duties. This is especially significant for Australia, which has now opened the doors to a large market for its products. After its political and economic fallout with China, Australia’s export revenues suffered immensely. However, the new deal, described as a “watershed moment” by India’s PM Narendra Modi, is set to offset some of these losses for Australia.

As the world grapples with the rising cost of living pressures caused by the Russia-Ukraine war, trade deals often seek to ease price-related pressures. With both countries eyeing this trade deal for over a decade, it is no surprise that the agreement would cement a solid trade foundation between them.

Australian goods can now find their way into a market with a population of around 1.4 billion consumers. India, the world’s largest democracy, has seen fast economic growth in the past decade, with high GDP growth projected for the coming years by economists.

The existing relationship between India and Australia has received a boost from the trade deal. As per the Australian government records, India was Australia’s seventh-largest trading partner in 2020 and the sixth-largest goods and services export market, valued at AU$16.9 billion.

The deal is expected to bring India to the category of the top three export markets for Australia by 2035. At the same time, a significant boost would be received by Australian farmers, manufacturers, producers, and service providers with the latest agreement. 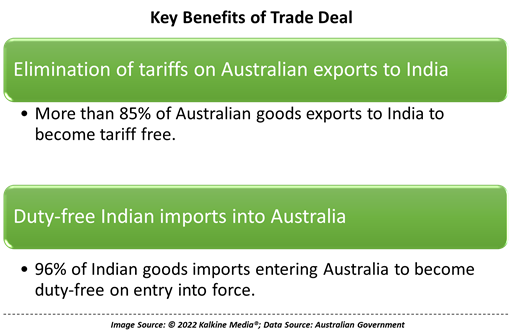 India-Australia Trade Deal ||All You Need To Know