VRX Silica Soars By 10% On ASX, A Quick Analysis Of Financial Performance

At the time when the world is facing a global sand crisis, VRX Silica Limited (ASX: VRX), formerly Ventnor Resources Limited, is focussing on meeting the global demand for the silica sand through its significant silica sand projects in Western Australia. The company is making progress with its strong project portfolio that includes five projects in Western Australia. Out of these five projects, three are prospective for silica sand, and the rest two are prospective for minerals like nickel sulphides, gold, high purity quartz and base metals.

VRX Silica is ideally positioned to capitalise on strong market outlook and demand. It is an emerging strategic silica sand producer of Australia that has a rapid pathway to financing and production. The company enjoys debt-free status along with decent cash & cash equivalent reserve of $2.2 million as at May 2019. This can be considered as a positive sign for the company. 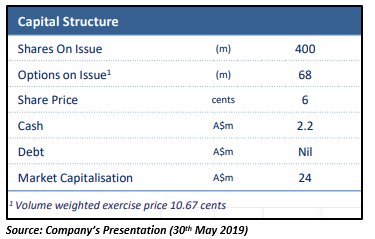 Let us have a look at the financial performance of the company in some detail:

The company released its interim financial report for the half-year ending 31st December 2018 on 12th March 2019. It posted first half-year (1HFY19) performance wherein revenue from continuing operations stood at $35,900, while loss after tax amounted to about $2.26 million.

The Current Ratio stood at 3.16x in 1HFY19, which is higher than the industry median of 1.88x, displaying its decent liquidity position as compared to the broader industry and its ability to address the short-term obligations. Also, the decent liquidity levels further strengthen the confidence that VRX would be able to make prudent deployment towards its strategic business objectives. Assets/Equity ratio stood at 1.04x in 1H FY19, which is lower than the industry median of 1.68x and, thus, it looks like that the company is less dependent on debt when it comes to financing the assets.

The chart below demonstrates the trend of VRX Silica’s Current Ratio and Assets/Equity ratio between 1HFY16 and 1HFY19:

The company published its annual report for the year ending 30th June 2018 in September last year. As per VRX Silica, the 2018 financial year was an exciting and eventful period for the company. The company identified a rising global demand for high-quality silica sand during the period.

On a CAGR basis, the company posted top-line growth of 4.6 per cent over FY16-18, while loss after tax has been reduced over the same period. Basic and diluted earnings per share was recorded at -0.75 cents per share during FY18. 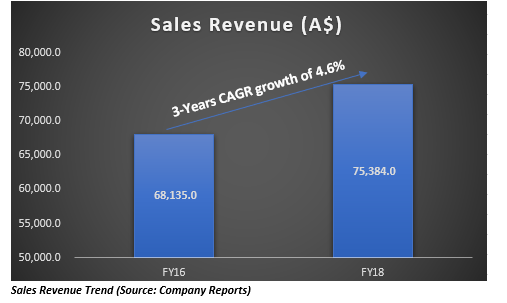 During FY18, the company reported the net operating cash outflow of ~$1.01 million against the value of ~$0.68 million in the pcp. Besides this, the company declared a net cash outflow of ~$0.91 million from investing activities during FY18 against a net cash inflow of ~$0.60 million in pcp. However, the net cash provided by financing activities was recorded at ~$0.97 million during the period.

The company informed in April 2019 that it has received commitments for $2.26 million capital raising through a share placement to sophisticated and professional investors. The company received strong support for the Placement from a wide range of investors. According to VRX’s Managing Director, Bruce Maluish, the Placement places the company to continue to swiftly progress both the Muchea and Arrowsmith Silica Sand Projects.

VRX Silica announced that 37,666,666 new fully paid ordinary shares would be issued at an issue price of $0.06 per share under the Placement. The directors of the company had committed to subscribe for ~4.3 million shares, i.e. ~$260,000, subject to shareholder approval.

Recently, the company also issued a notification on the issue of 4,332,083 ordinary fully paid shares and 4,000,000 options. The fully paid ordinary shares were issued with regards to director participation in the placement, at an issue price of $0.06 per share, expiring on 3rd June 2020. The shares have been placed under voluntary escrow lock for a year. The options, issued under The Ventnor Employee Incentive Plan, are exercisable at 9c each, expiring on 30 November 2022.

VRX Silica’s financial performance in the last few years indicate that the company is well positioned to progress with its silica sand development program. The company is also expected to complete the BFS (bankable feasibility studies) for three of its projects - Arrowsmith North Project, Muchea Project and Arrowsmith Central Project - in September 2019 Quarter.