Silica sand is a strong growth mineral used globally for various purposes including metal casting, glassmaking, paint and coatings, ceramics, oil and gas recovery, chemical production and many more. As per market expectation, the silica sand shortage is predicted to worsen due to its increasing demand and diminishing supplies. The shortage of silica sand has resulted in increasing prices, opening a door of opportunities for the company to tap this potential market. 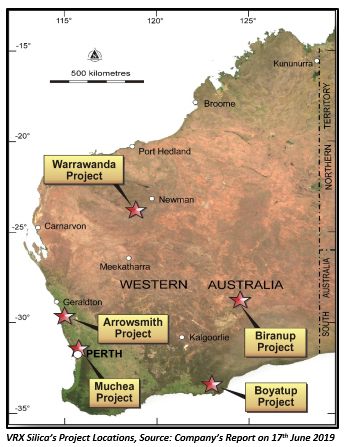 Let us know more about each of the company’s projects in some detail:

The testwork program results confirmed high recoveries of silica sand products from the project area. The table below provides details on the recovered products: 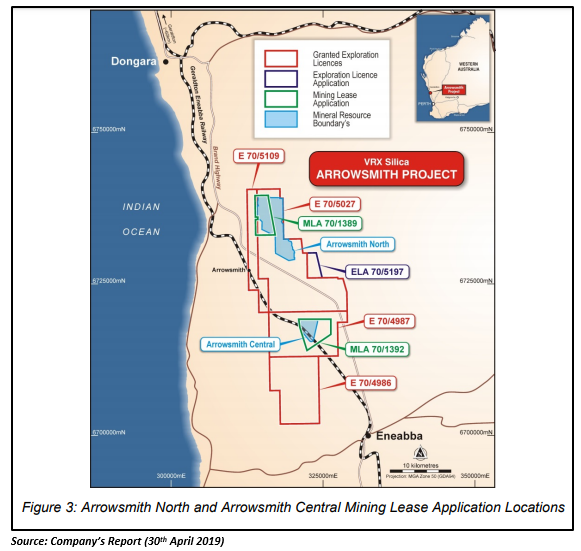 Arrowsmith North: The CSA Global estimated an Inferred MRE in October 2018 for the Arrowsmith North target area. The MRE of 193.6 Mt @ 98% SiO2 was reported considering the JORC Code 2012 Edition. The project area was only tested with a shallow auger, and the MRE results defined two types of silica sand, white and yellow sand.

The air core drilling (closer-spaced and deeper than initial work) was carried out at the Arrowsmith North target area in March 2019 to significantly increase the volume of sand tested as well as JORC confidence. CDE Global completed the final iteration of the testwork in March. In May 2019, VRX Silica announced the results of its testwork program, confirming high recoveries of commercial silica sand products from the site as shown in the table below:

Arrowsmith Central: The company announced a maiden Inferred Mineral Resource Estimate of 28 Mt @ 97.7% SiO2 in December 2018 at its Arrowsmith Central Prospect. The MRE was based on results obtained from an exploration program of thirty-nine hand-held auger drill holes for 98.6 metres.

The results of the testwork program at the Arrowsmith Central target area also confirmed high recoveries of commercial silica sand products as follows:

VRX Silica lodged a Mining Lease Application MLA70/1392 for its Arrowsmith Central prospect in February this year. The MLA included 96 per cent of the previous MRE of 28 Mt @ 97.7% SiO2.

Arrowsmith North Exploration Target – Potential volume is estimated from 40mRL to the top of the dune on an assumption that silica sand is between 70 – 100 per cent of the dune. The target grade is estimated at +95% SiO2.

Arrowsmith South Exploration Target - Potential volume is estimated from 45mRL to the top of the dune on an assumption that silica sand is between 50 – 100 per cent of the dune. The target grade is estimated at +95% SiO2. It consists of intercalation of limestone and dune sands.

However, these estimations are conceptual in nature. The MRE could not be estimated due to the insufficient exploration at these targets, with an uncertainty of exploration resulting in MRE.

Warrawanda HPQ Project: The company’s Warrawanda HPQ Project is located at 60kms to the south of Newman, Western Australia. The company holds two granted exploration licences at the project - E52/2373 and E52/3447, that are prospective for nickel. In March this year, VRX Silica declared the rock chip samples’ results from Warrawanda Project. The results indicated that the Warrawanda Project tenements have the potential to produce a High Purity Quartz (HPQ) product.

Biranup Project: VRX Silica has identified encouraging gold and copper-nickel prospects at the Biranup Project that is located adjacent to the Tropicana Gold Mine in WA’s Goldfields. The company earlier entered into an option agreement with Metalicity Limited (MCT) enabling MCT to acquire a 40 per cent interest in Biranup Project, with a farm-in and JV agreement for remaining project. However, MCT informed in March 2019 that it has decided not to progress with the proposed transaction. Post which, the company is looking for JV opportunities to enhance shareholder returns for its Biranup project, as it is currently targeting its silica sand resources.

BFS and Project Timelines: VRX Silica is expected to finalise bankable feasibility studies (BFS) for its Arrowsmith Project (North and Central prospects) and Muchea Project in the September 2019 Quarter. The figure below demonstrates the company’s project timelines: