The Australian Healthcare System is amongst the most inclusive in the world, and it offers a wide range of services right from catering to general and preventative health and treating more complex conditions in patients. The healthcare system in Australia consists of both public and private service providers. They are funded by the government, non-government group and even by individuals.

Let us explore two healthcare stocks- IMM and TLX, that are listed on the Australia Securities Exchange and look at their recent updates and stock performance.

It is interesting to note that these stocks under discussion, pertaining to the same industry have depicted opposite performance outcome in their 6-month returns, as shown in the image below:

A globally active biotechnology company, Immutep Limited leads the development of immunotherapeutic products to aid in the cure of cancer and autoimmune diseases. It aims to provide options in innovative treatment methods to the market, for the people in need of them and in turn maximize value to the stakeholders. The company is listed on ASX in Australia and NASDAQ in the United States.

The company’s leading product eftilagimod alpha has been created on the LAG-3 immune controlling mechanism and is a soluble Lag-3Ig fusion protein. 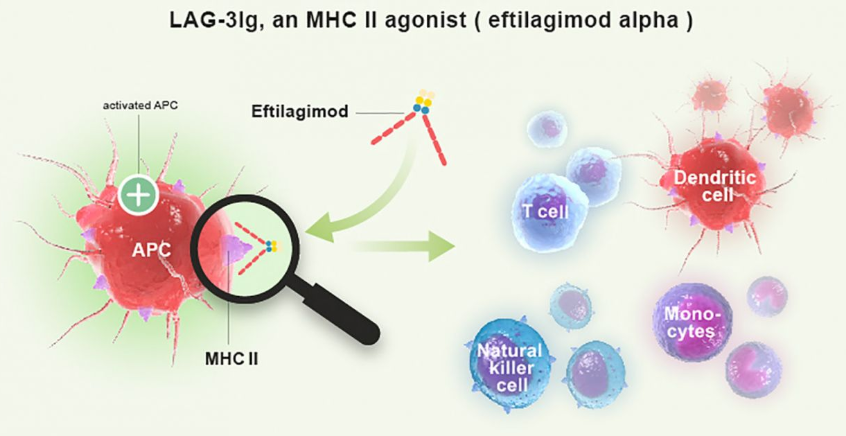 On 13th June 2019, the company made an announcement regarding the Recruitment for 2nd line NSCLC and 2nd line HNSCC cohorts of the TACTI-002 trial. These are taking place in collaboration with MSD. As per the announcement, the patient recruitment of the initial cohort of the study Part A had been completed.

As per the statistics, 17 patients had been enrolled into the first cohort of the first line NSCLC arm of the Phase II trial. The enrolment had begun in early 2019 and the first patient was dosed in March 2019. Under Simon’s two-stage design, the initial cohort of first-line NSCLC patients could be expanded by adding another 19 patients, in case a pre-defined number of responses are noticed. The company’s CSO and CMO, Dr Frederic Triebel notified that the first data from the present trial is anticipated to arrive by the middle of 2019.

At present, there are ten study centres that are involved in the trial recruiting process in Europe, Australia and the US. Also, three more sites are most likely to join in the patient recruitment process in the upcoming months.

On 6th June 2019, the company notified that the first patient in the INSIGHT-004 Phase I trial had been registered in Germany region and had also obtained the first dose of treatment phase. The trial is being conducted in collaboration with Darmstadt, Merck KGaA and Germany and Pfizer Inc. It aims to evaluate and deduce the combination of eftilagimod alpha with avelumab in various cancer indications.

A global biopharma player, Telix Pharmaceuticals Limited aims to develop therapeutic and diagnostic products based on targeted radiopharmaceuticals or MTR. With its headquarters in Melbourne, the company has global operations in Indianapolis, Brussels and Kyoto.

Presently, the company is developing a portfolio of clinical-stage oncology products that would take into consideration, the notable but unmet medical requisites in brain, renal and prostate cancer.

On 13th June 2019, the company announced that it had settled on a master service and distribution agreement with Eczac?ba??-Monrol. As per the agreement, the company had appointed Eczac?ba??-Monrol as its production partner for radiopharmaceutical products and as distributor in Turkey/ /North Africa/ Middle East. In the initial scenario, both the parties would lay emphasis on the production and distribution of TLX250-CDx for imaging of renal cell carcinoma with PET, to aid four Turkish clinical sites to the ZIRCON Phase III trial.

Both the parties had been working for more than six months to enable the transfer of technology regarding the radiopharmaceutical manufacturing methods for TLX250-CDx to Eczac?ba??-Monrol’s cyclotron production facility in Istanbul. With the inclusion of the Turkish patients in the ZIRCON trial, the company is hopeful to simultaneously file for marketing authorization in Europe and Turkey.

Prior to this announcement, the company notified on 12th June, that it had an extension of its research collaboration with IRS, Osaka University and the Department of Nuclear Medicine and Tracer Kinetics, at Osaka University Graduate School of Medicine. The collaboration would be partly funded by a grant received from the JST via the OPERA program. The fund amounts to a total of $260,000 and would be managed by the company’s subsidiary, Telix Pharmaceuticals Japan KK.

The first season of this collaborative research had proven to be successful and a research group member mentioned that the same is expected in the second season as well. In the first season, the efficacy of a variant of TLX101 was observed and the publication of the outcome is planned. Besides this, a new TLX102 was developed too.

On 4th June 2019, the company presented itself at the Jefferies Healthcare Conference in New York. In the presentation, the company provided the financial highlights which are depicted in the image below, as on 31st May 2019: 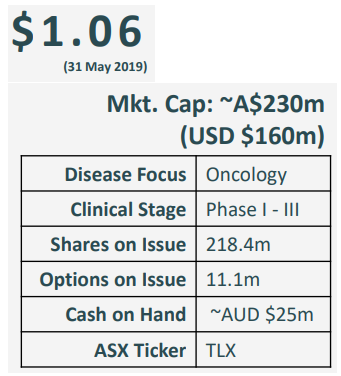 The company also explained the competitive landscape, stating that not many companies in the radio-pharma sectoral space have a late-stage product pipeline, making TLX a unique pick. There was a moderate competition observed in the prostate and GBM and absolutely no competition in the renal cancer space.