Despite increase in the working capital and the allocation of a further US$37 million to on-market share buy-back during the quarter, the company’s net cash increased by US$48 million to US$726 million. Additionally, the company was able to maintain its FY2019 operating unit cost guidance for all its operations. It also achieved a record YTD ore production at Australia Manganese. Due to favourable market conditions, the FY2019 production guidance was increased by 4% at both its manganese ore operations.

The announcement also highlighted that the company had lowered production guidance at Worsley Alumina for FY2019 so that it can concentrate on improving the performance of calciner to sustainably achieve nameplate capacity. The production guidance for Brazil Alumina was reduced by 5% in order to improve the steam generation and to realize the full benefits of the De-bottlenecking Phase One project.

Due to the community protests and slower ramp-up of activity at Klipspruit, the export production guidance at South Africa Energy Coal for FY2019 was reduced by 0.8 metric tonnes.

At Illawarra Metallurgical Coal, the company is on track to achieve the production guidance for FY2019 post the completion of longwall moves at Appin and Dendrobium by the end of the quarter. The company was also successful in renegotiating the remaining labour agreements.

The production guidance at Cannington was maintained during the period. The company started temporary road haulage during the quarter in order to reduce the loss of rail after the floods in North Queensland.

The production guidance at the Hillside Aluminium and Mozal Aluminium was maintained during the period even though there was an increase in the frequency of load-shedding events. 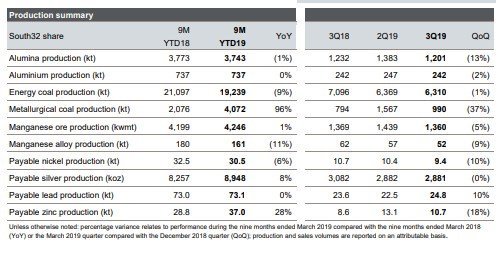 On 8 April 2019, AusQuest Limited (ASX: AQD) under the Strategic Alliance with South32 started the diamond drilling program to test the electromagnetic and magnetic targets at the Yallum Hill Copper Prospect in Western Australia. An initial drilling which consists of two diamond drill holes will take place and is expected to complete approximately in two weeks. The assay is expected to be available in four weeks after the completion of the drilling program.