Fintech or financial technology as the name suggests describes new technologies that are used for improving and also automating the application of financial services. The fintech industry is an emerging industry which competes with the traditional financial techniques through the use of technology.

In today’s scenario, the application of fintech is widespread. Mobile banking through smartphones, use of data analytics to derive credit score, etc. are the examples of fintech making inroads and directly impacting the lives of the end users.

Peppermint Innovation Limited (ASX: PIL) belongs to the IT sector, and it develops new and innovative mobile phone applications. The company focuses on the commercialization and further expansion of the Peppermint Platform, which is a mobile banking, payments and remittance technology which is designed for the usage of banks, mobile money operators, the credit card companies along with the microfinance institutions. 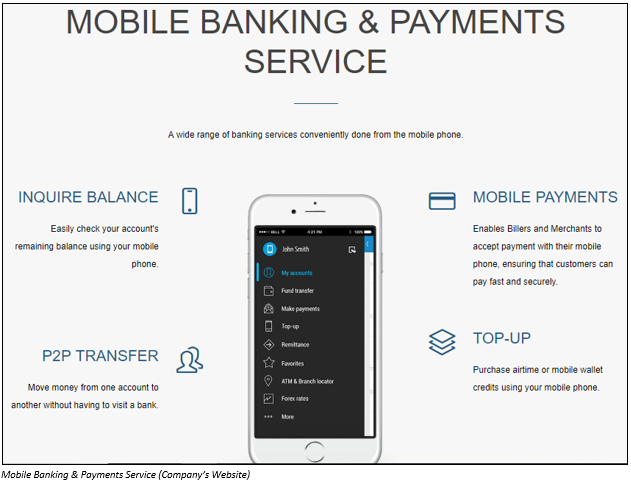 Recently on 17 May 2019, the company announced that its mobile App - developed for the Cooperative Health Management Federation (CHMF) was launched at the annual general assembly of CHMF. CHMF comprises of 116 member cooperatives and above 41,000 members across the Philippines and has access to an established network of 447 hospitals and clinics which includes diagnostic centres and dental clinics.

With the 1st phase of the Peppermint-developed mobile App, the 41.088k members of CHMF would be able to trace accredited medical centres. They can also make appointments as well as review all of their past medical insurance records online.

In the next phase of the CHMF mobile App, there would be an option of mobile wallet, QR code payments, member to member (M2M) payments and other transactional facilities.

In Q3 FY2019, the company reported 92% growth in the cash receipts with an expectation to see further growth as the business expands. More than 12,000 Filipinos got registered with Bizmoto during the period. The largest interbank network of local and offshore banks BancNet in the Philippines joined hands with Peppermint on the provision of mobile banking technology and services.

Raiz Invest Limited (ASX: RZI) is the largest mobile-first financial services platform in Australia. The company is focused to building the best possible product and comprises of an outstanding team of software engineers, designers, mathematicians, financial experts, as well as marketers.

On 6 June 2019, the company provided an update regarding the active (paying) customers and total funds under management for the month of May 2019 ending 31/05/2019. 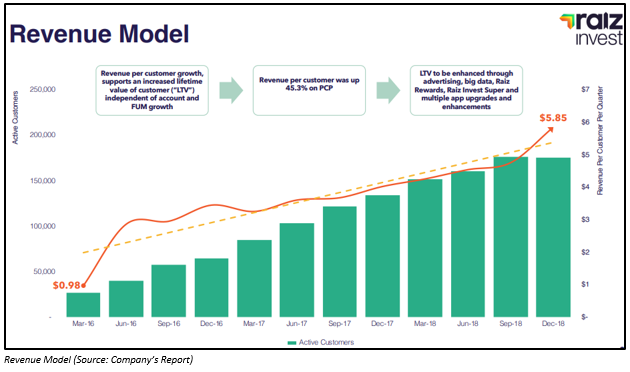 In the 6 June ASX release the CEO of Raiz Invest, George Lucas stated that the growth in funds under management in May 2019 along with the joint venture with Jewel indicates that the business continues to develop as per the strategic vision of the company.

On 28 May 2019, the company released its UBS Emerging Companies Conference presentation on ASX in which it provided its 1H and 2H FY2019 highlights, its opportunities in Australia and New Zealand, and the company’s strategy and outlook.

In 2H FY2019, the company announced the acquisition of Go Car Finance in NZ which added A$54.3 million to the Secured Automotive Loan Book. It also opened new opportunities in the new region where there is a wide scope of growth. The company had more than $100 million in the form of debt and cash available for accelerating the growth of the Automotive Loan Book. The Bad debts of the company were managed well and were in the target range of 5-6 percent of the gross loan book.

The company further highlighted that Australian automotive market generates $80 billion of annual vehicle sales, with up to $20 billion annual market for consumer vehicle financing, of which $6 billion is attributed to used vehicle financing. In this market, every one out of 550 registered vehicles in Australia were being financed by the company. As per the estimation of the company, it finances 3% of the used car market annually. 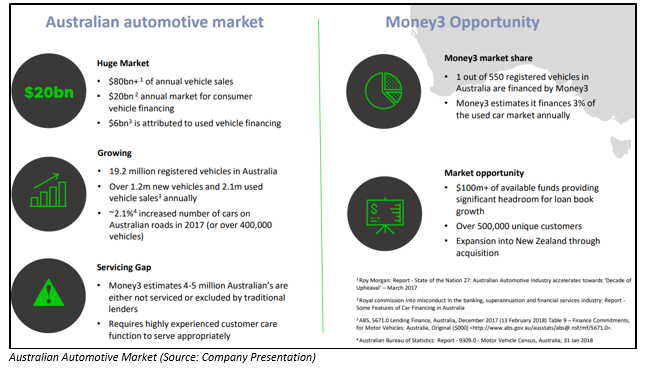 Change Financial Limited (ASX: CCA) is a US-focused financial technology company that is engaged in developing innovative and scalable payments technology in order to provide solutions for businesses as well as financial institutions.