Rafaella Resources Limited accelerates its transition from an Explorer to Developer

Tungsten (APT) pricing in 2018 increased to over US$320/mtu whereas later it found a steady price support at around US$275/mtu. It is a strategic metal and has no substitute. Due to its unique properties and uses in manufacture of engines, drill bits and military, tungsten has been a hot topic of discussion amid industry experts.

RFR transformational updates are released in its quarterly and cash flow highlights for the quarter ended 30 September 2019: 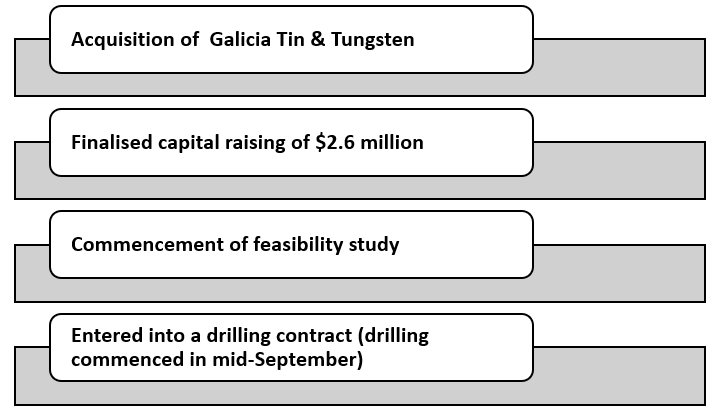 The September quarter was a significant one as the Company accelerated its transition from explorer to developer, advancing the newly acquired Santa Comba Project in Spain:

Transamine Trading SA has agreed to provide investment and operational support, including buying 100% of tin and tungsten production whereas post a positive feasibility study, H.C. Starck GmbH will acquire the tungsten concentrate from Transamine Trading. Pertaining to the same, a German Government Untied Loan Guarantee Scheme has been pre-approved for up to €11 million in support of the HC Starck offtake to fund the Project development.

The Company is fast-tracking the Project’s advancement. Right after acquisition, John Webster, an experienced consultant mining engineer was appointed as Feasibility Study Manager and Tomra Sorting GmbH, a leading ore sorting company along with engineering consultancy Grinding Solutions Ltd was engaged towards the Feasibility study.

With the aim to upgrade and expand the near surface JORC Inferred MRE at Santa Comba and drive metallurgical studies for the Project feasibility study, RFR began drilling at the Project in mid-September. Local drilling contractor Geonor Sondeos y Peforaciones S.L. conducted the diamond drilling programme and has already mobilized two diamond drilling rigs to the project. Subsequently the Company engaged Sondeos y Perforaciones Industriales del Bierzo, S.A. (“SPI”) for the use of a reverse circulation (“RC”) rig.

For more insight related to the result, we encourage you to READ HERE.

Currently, the diamond drilling is progressing at the Quarry North deposit and will be followed by the adjacent Barrilongo. The RC rig is drilling the Eliseo area to the east of the quarry. A third diamond rig is due on site within the week, taking the total number of rigs to four.

In August, RFR finalised a placement of fully paid ordinary shares raising $2.6 million (before costs) which comprises $2.22 million in cash via the issue of 11.1 million shares at an issue price of $0.20 to sophisticated and strategic investors and an agreed contribution by EverBlu Capital (Lead Manager) and Principals of $0.38 million. Capitalisation remains subject to ASX and shareholder approval.

Moreover, the Company received Subscriptions of $2.8 million but elected to take $2.6 million as originally sought. The agreed EverBlu contribution comprises $0.104 million in cash for shares at an issue price of $0.20 per share and the capitalisation of corporate advisory fees also at an issue share price of $0.20, totaling $0.276 million.

Transamine Holdings and Investments agreed to support the transaction with a commitment of $1 million followed by a further $0.5 million post the delivery of a positive Project feasibility study and the grant of any development financing that allows the Project to proceed to construction.

The below table provides the cash flow statement highlights for the quarter ending 30 September 2019: