The COVID-19 outbreak has been the epicentre for the global turbulence and the ASX listed resources stocks have witnessed a lot of turmoil amid spiked volatility across the global financial markets and consumption-based commodities.

While some commodities such as gold and in the status quo silver, have seen continuous upside rally, commodities like crude oil, base metals, mineral sands have observed a see-saw moment. The ASX mining stocks and the overall resource sector have moved correspondingly to the commodity prices in the global market.

However, now, the ASX-listed resource sector is finally taking a breather from a fall as more and more mining operations making to the list of essential services across the continent and demand from China improving slightly after a brief plunge.

Many ASX-listed resources companies such as Iluka Resources Limited (ASX:ILU), Jupiter Mines Limited (ASX:JMS) are now reporting their quarterly or yearly performance for stakeholders and also notifying the investing community over measures adopted by them to tackle the global trade issue.

Mineral Sand Sales Plunge by 40.1 per cent Against December 2019 Quarter

The quarterly production of the Company for mineral sands fell by 4.2 per cent against the previous quarter to stand at 261.5k tonnes; however, remained 32.6 per cent up against pcp.

The snippet of the quarterly performance of the Company is as below: 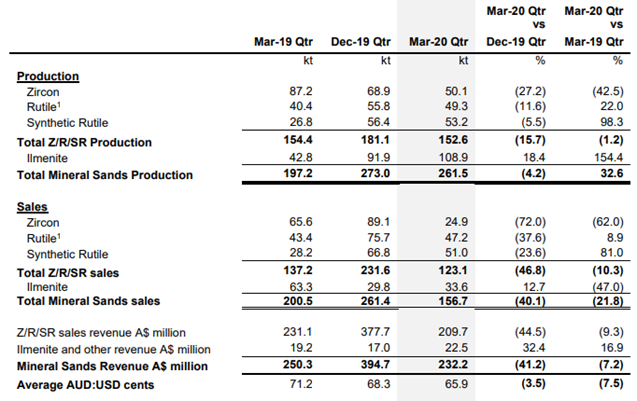 Iluka informed that the Chinese ceramic industry went into total lockdown during February and was then shut until the middle of March, which further translated into lower sales and in tandem lower revenue, especially In zircon sales, which plunged by 72 per cent against the previous quarter to stand at $24.9 million.

The Company further suggested that while the Sierra Rutile business remains operational, Sierra Leone has closed its borders, which has impacted the planned-level of production-focused expatriates; however, the titanium dioxide sales, retain a high degree of revenue certainty due to take or pay contracts covering the majority of the Company’s rutile and synthetic rutile production.

Over the continued uncertainty in relation to the impacts and duration of the COVID-19 outbreak, ILU announced withdrawal of 2020 guidance; however, the demerger of its royalty business remains scheduled for execution in 2020.

The Company also mentioned that it had altered production settings at the Narngulu mineral separation plant in order to reduce the zircon production in the wake of market uncertainty, and further suggested that if the new production settings remain in place for the remainder of the year, the production will stand at 110k tonnes lower against the withdrawn guidance at 170k tonnes.

The Company disclosed its preliminary final report for the year ended 29 February 2020 and suggested that its net profit from 49.9 stake in Tshipi é Ntle Manganese Mining (Proprietary) Limited for FY2020 stood at $98 million, down by ~91.84 per cent against the previous corresponding period of FY2019.

JMS informed that Tshipi produced and exported 3.41 million tonnes of manganese during the period, almost in line with the previous year production of 3.45 million tonnes, despite challenging mining conditions.

Further, the cost of production averaged at ZAR 31.22 per dmtu on a free-on-board (FOB) basis, which makes its operation one of the lowest cost manganese producers globally.

Also, Tshipi completed a concept study into a potential mine expansion of up to a production profile of 4.5 million tonnes per annum, which could be thoroughly supported by the existing reserves, and the Company would now undertake a comprehensive feasibility study.

Manganese prices took a considerable hit during the third quarter of the financial year in the wake of the U.S-China trade war and weaker steel demand; however, prices steadily recovered in January 2020 but plunged again due to the COVID-19 outbreak.

Despite the industry as well as global challenges during its financial year, both Jupiter and Tshipi remained cash positive and profitable.

Tshipi’s performance resulted in the distribution of dividends to its shareholders totalling approximately ZAR 2 billion. Jupiter, in turn, has declared dividends yielding 14.8 per cent with a payout ratio of almost 92 per cent of Tshipi dividends and marketing profits received.

The FY2020 revenue stood at $10.35 million, down by ~ 21.0 per cent against the previous corresponding period (or pcp). The Company generated a net profit from operations of $4.13 million, up by 80.34 per cent against FY2019. A substantial decline in employee benefits expense of ~66.0 per cent supported the net profit, and it requires further investigation.

However, the report presented by the miner is preliminary and pending an audit, which is currently underway.