ASX-listed and Perth-based explorer Anglo Australian Resources NL (ASX: AAR) has been attracting investors and gaining market attention of late with regular and positive updates from one of its wholly owned projects- The Mandilla Gold Project.

We encourage you to read about the assay results from the first eight holes from an RC campaign at Mandilla East- HERE. 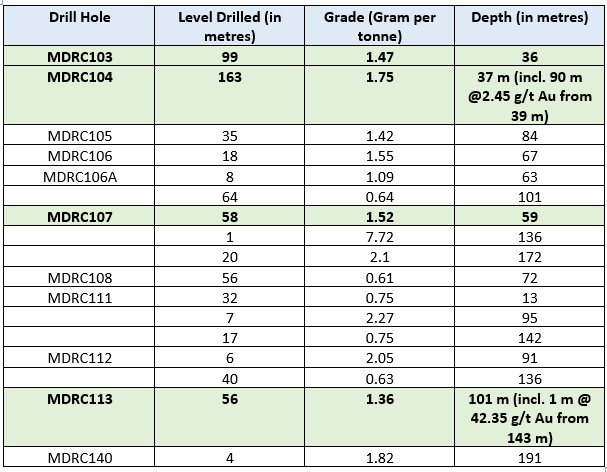 Part of âMandilla West Southern Extensionâ MDRC106 was abandoned short of planned depth due to drilling issues but was redrilled nearby as MDRC106A. Below are the inferences that can be drawn from the results:

The below table highlights the highly encouraging results from the extensional holes to the north, with several significant gold intersections encountered:

It should be noted that the significant results in MDRC134 and MDRC136 demonstrate that the gold mineralised system has yet to be closed off to the north, and much of the extensive soil anomaly has yet to be drilled.

These new results reveal the potential for the Mandilla East syenite-hosted gold system to be substantially larger than is understood presently.

The results returned from the current RC program demonstrate that the substantial additional drilling to better define the extent of gold mineralisation at Mandilla East is warranted, both at depth, and for at least an additional 500 metres of strike potential.

At the Mandilla South Prospect, assay results from two holes from an initial RC traverse were received, with MDRC126 returning several significant gold intervals. The final assays from the remaining seven holes of the RC campaign are expected in the coming days.

The company has commenced a 60-hole shallow (slim-line) RC campaign for an aggregate 3,600 metres to test the 500-metres gap between the Mandilla East and Mandilla South Prospects, which was ineffectively drilled previously.

Besides this, the known areas of shallow high-grade gold mineralisation in the vicinity of the previously mined Mandilla West palaeochannel would be tested and Supergene and shallow primary gold mineralisation potential in several areas of known gold anomalism outside of the main trends would be studied.

The company would identify a primary gold source near the northern end of the palaeochannel pit.