In the world of cancer, one billion-dollar molecule that has been making a big noise for its potential to extend life in men with the late-stage prostate cancer, concerns an experimental radioactive drug called Lutetium-177 (177Lu) labelled PSMA-617 (referred to as 177Lu-PSMA-617). This molecule is being investigated for its ability to give some extra time with less pain to the men with prostate cancer, where the cancer is progressive and at the last stage with mounting pain from multiple secondary tumours growing predominantly in the skeleton.

The biotech industry might have made many developments in the recent past, but the treatment for a common cancer like late-stage prostate cancer still remains largely unmet. For a company like Noxopharm Limited (ASX: NOX), their research and development may mean a huge opportunity in the global pharmaceutical industry.

In one of its trials, Noxopharm has placed its belief in the synergies of radiopharmaceutical 177Lu-PSMA-617 and its lead drug candidate Veyonda® to get started with the investigator initiated clinical trial called LuPIN in Australia. This ongoing trial, initiated by St Vincent’s Hospital in Sydney, focuses on a therapeutic approach where the radioactive drug Lu-PSMA supplied by US biotech company, Endocyte is injected intravenously to spread across the prostate cancer cells everywhere in the body. And the combination of Veyonda® with this radioactive drug is being investigated to see if Veyonda® will boost the effectiveness of the radiation, so that more men respond and stay on treatment longer under the well-tolerated environment.

St Vincent’s unveiled the results that outlined the highly encouraging interim data from its ongoing LuPIN study with Noxopharm, in a presentation at the Society of Nuclear Medicine and Molecular Imaging (SNMMI) in their 2019 Annual Meeting held in California from 22 to 25 June.

The Principal Investigator of the study and Director of Theranostics and Nuclear Medicine at St Vincent’s Hospital, Associate Professor Louise Emmett presented the interim data at the conference for the first 16 patients evaluated under the 56-patients LuPIN Study from the Phase Ib/IIa trial. The data reported an 69% overall response rate, (exceeding the target of >50% reduction in PSA); with over half of the men in this first group (9/16) being able to complete their full course of 6-cycles of treatment, all in a generally well-tolerated way.

About this data: This research was originally published in an earlier form in the Journal of Nuclear Medicine. Emmett L et al. Interim results of a Phase I/II prospective dose escalation trial evaluation safety and efficacy of combination 177Lu-PSMA-617 and NOX66 in men with mCRPC post androgen signaling inhibition and 2 lines of taxane chemotherapy (LuPIN trial). The publication is available at the following link: # 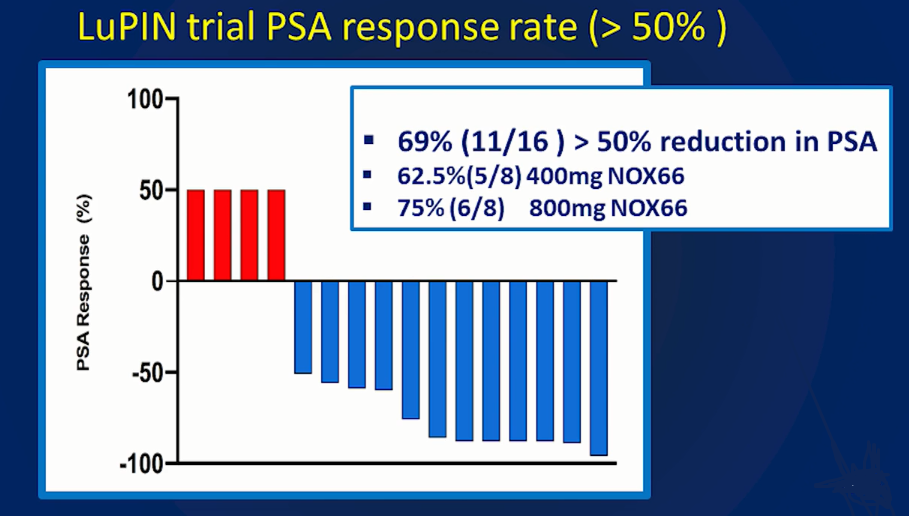 Professor Emmett opened the presentation with an example of the patient who was injected with the 177Lu-PSMA-617 on its own and this showed a decent uptake but had eventually relapsed before he could reach the end of his treatment. The point that Professor Emmett tried to make was that the bigger problem is associated with the survival of the patients was to at least complete their full course of treatment, where the cancer is progressive and pain levels are high.

In this scenario, Professor Emmett explained that for biologically targeted radiotherapy be effective, the agents should involve number of factors like:

Under the ongoing LuPIN trial, the company used the combination of two experimental drugs that includes:

Hypothesis of the Study: Professor Emmett stated that the hypothesis of the trial was: “Using combined cancer targeted treatments leads to synergistic improvement in treatment response with minimal increase in side effects and overall improved quality of life for men with progressive metastatic castration-resistant prostate cancer (mCRPC).”

The hypothesis was based on a number of pre-clinical studies that Noxopharm performed with Veyonda® in combination with radiotherapy, one being in a mouse genotype study in a mammary tumour model. 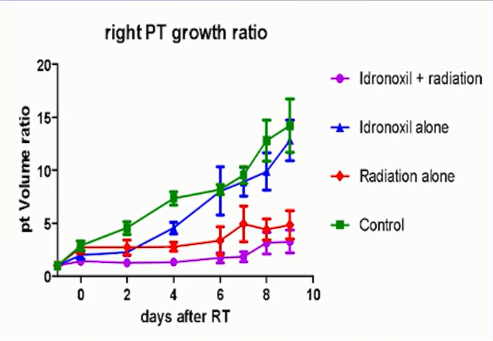 Details of the Study: Under the 56-patient Phase Ib/IIa LuPIN study, the first 16 patients were divided into two cohorts of 8, who were reportedly given 6 injections over 8 months, at the interval of 6 weeks. Cohort 1 received 400 mg Veyonda® and Cohort 2 received 800 mg Veyonda®.

The study is focused to evaluate the efficacy and safety of Veyonda® combined with the radiopharmaceutical, 177Lu-PSMA-617, in men with progressive metastatic castration-resistant prostate cancer (mCRPC) following cabazitaxel, docetaxel, abiraterone and/or enzalutamide.

Results of the Study:

Professor Emmett said, “These initial results show that the combination treatment was well tolerated with early signs of efficacy.” Further, the study has now been expanded to include an additional 24 more patients.

As stated by Dr Graham Kelly, NOX Executive Chairman, the data complements the encouraging interim results reported from the Company’s DARRT-1 study in May 2019, also involving patients with late-stage mCRPC, and offers further research indications for the immunological activities of Veyonda®.

Also Read: Noxopharm – A Lens Over Its Clinical Trials For The Treatment Of Prostate Cancer