Oklo Resources Limited (ASX: OKU) is a metals and mining company, involved in the business of mineral exploration. It was officially listed on ASX in May 2007. OKU, by release, updated the market about the confirmation of second bedrock discovery at Kouroufing. The company demonstrated that its $5 million drilling program at Kouroufing and Dandoko gold projects in West Mali is advancing according to plan with multi-purpose drilling rig continuing at Dandoko and the drilling process concluded at Kouroufing. 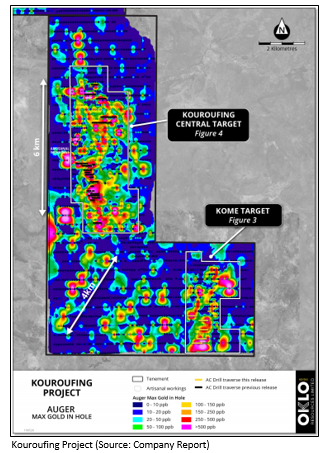 The assay results received from nine follow-up reverse circulation and one diamond hole located at Kouroufing Central Prospect, where numerous high-grade gold intersections were previously reported within the 6 kilometre-long auger gold corridor. In addition, the results have confirmed the presence of narrow zones of high-grade gold mineralisation, which have been hosted within broad, lower grade zones with grades of up to 20.g/t gold returned. 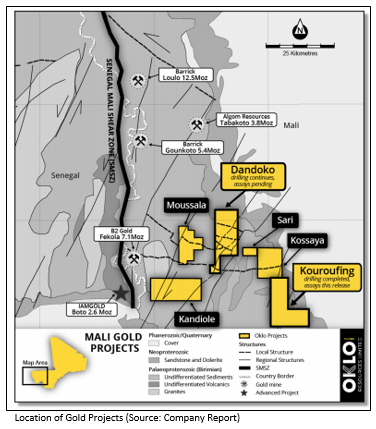 Apart from Kouroufing Project, a multi-purpose drill rig is being continued at Dandoko Project, and 4,250m had been completed from the planned 16,000m program. The company also communicated about the drilling programs in development at Sory, Seko, and Dabia as well as other targets along with the 12 km long Dandoko gold corridor.

Moving to the March 2019 quarterly activities of the company. OKU’s major focus during the quarter was on the continued advancement of the $5 Mn drilling program over its gold projects located in Mali, West Africa. More than 10,000m of drilling, comprised of aircore, reverse circulation and diamond core, was completed at Dandoko and Kouroufing Gold Projects. Additionally, more than 31,000m of low-cost auger drilling was completed at Kouroufing, Sari and Kossaya Gold Projects in the quarter ended March 2019.

With respect to confirmation of extensions at Seko Gold System, three DD holes had been completed at Seko, targeting reoccurrence of the high-grade shoots within the primary zone. It successfully intersected various alterations hosting variable widths of gold mineralisation indicating a potential for extensions on the SK2 and SK3 gold systems. The company is financially well positioned with the cash reserves of circa $9.9 million at the end of March 2019 quarter.