The average hole depth of the auger hole was 15 metres at 100 metres centres on 400 metres spaced line. From each hole, three composite samples that were collected were of variable thickness. These samples signified the laterite, transition as well as saprolite horizons.

The new results obtained was able to define a gold anomalism in multiple trends of 5.5 km, with substantial composite grades. 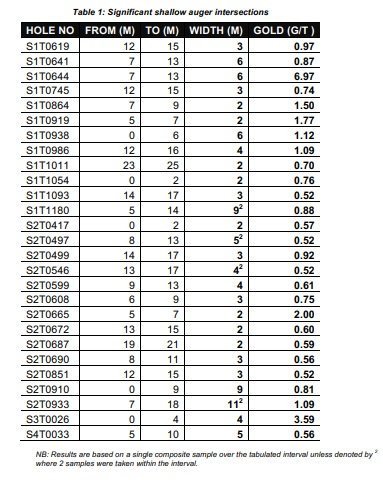 The results obtained at Kouroufing boosted the potential for further bedrock gold discoveries. There were various anomalies noted for deeper aircore (AC) drilling.

The company has completed the first pass AC drilling over the +1km long Kome auger anomaly. However, from 79 holes, the assay results are still pending. From 8 reverse circulation drilling and one diamond hole over the Kouroufing anomaly is still pending and the Field mapping along with the IP geophysical survey is under process.

At the Kossaya and Sari Projects, the first pass auger drilling has been concluded. There were four auger rigs that got demobilized.

On 19 March 2019, the company provided an update on the drilling activities that were planned in West Mali.

On 6 March 2019, the company confirmed the extension of the Seko Gold System.