ASX-listed oil stocks are now under a sentiment splash with many energy stocks such as Oil Search Limited (ASX:OSH), Horizon Energy Limited (ASX:HZN) moving in an upsurge.

Energy market now seems to be welcoming the recent decision by OPEC to extend the 9.7 million barrels per day production cut till July 2020, a month extension to the previous deadline of June 2020.

The ongoing geopolitical event is further supporting the market sentiment that the global oil supply glut would witness some ease, which in turn, is now supporting the oil price, and providing a cushion to ASX-listed oil stocks.

On June 2020, the stock was suspended from trading on the PNG exchange over orders from the acting Chairman of the Securities Commission of PNG, citing that the Company had violated the PNG Capital Market Act.

However, OSH informed that it would move forward with the matter to the National Court of PNG to defend its position, and suggested on 9 June 2020 that it has successfully obtained an interim injunction from the National Court of Papua New Guinea, allowing the Company to recommence trading on the PNG exchange. 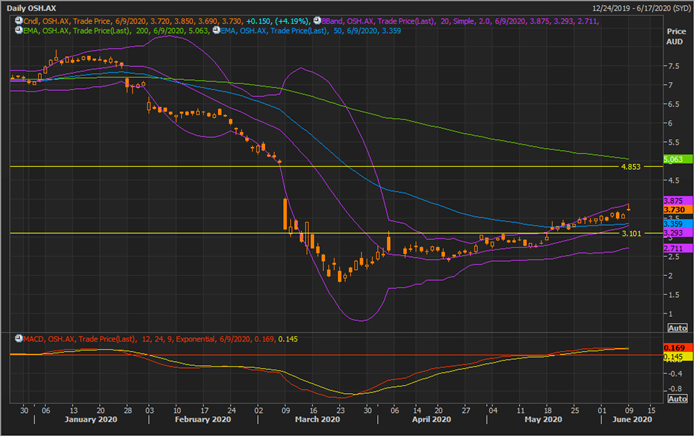 On the daily chart, it could be seen that the stock has breached its horizontal resistance line of $3.101 and is now testing the +1 Standard Deviation of the 20-day simple Bollinger band (as the mean value is a 20-day simple moving average), suggesting that the stock is now attempting a volatility breakout.

Furthermore, the stock is trading above its 50-day exponential moving average for a few trading sessions and hovering around the same, suggesting that the near-term sentiment around the stock is turning bullish, which could also be inferred from the positive signal from the 12,24,9 MACD indicator.

The second and decisive resistance (as overlapping with the 200-day EMA) for the stock is now at $4.853, i.e., above the previous gap down opening seen during early March 2020. Also, as the mean value of the Bollinger band along with the 50-day EMA is merging with the support line of $3.101, the same level would be strong support for the price.

HZN started a price recovery after hitting a low of $0.042 (intraday low on 27 March 2020) to the present high of $0.081 (as on 10 June 2020), which marks a price appreciation of ~ 92.85 per cent. During the trading session on 9 June 2020, the stock witnessed a large-body bullish candle after the Company announced that the investigation into a payment to acquire an interest in Petroleum Retention Licence 21 in the Western province of PNG in 2011 had been concluded.

Investigation into the Bribery Speculation and Conclusion

Investigation was concluded by Herbert Smith Freehills and Deloitte and included a forensic review of all aspects and an oversight from an independent Board Committee. HZN further suggested that it confirms that there has been no breach of any Australia foreign bribery law and there has been no regulator investigation concerning the same matter.

HZN also citied that the 2011 transaction structure and the quantum of the purchase price paid by OSH were to advance the Company’s business and further confirmed that it was consistent with the market practice and comparable to other relevant transactions at the same time. 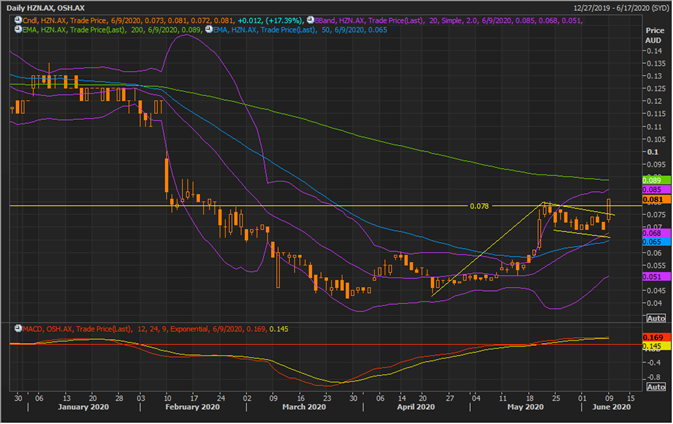 On the daily chart, it could be seen that the stock price is now forming a bullish flag and the stock has given a breakout of the same during the trading session on 9 June 2020; however, the pattern is yet pending confirmation, and a throwback to the upper line of the flag followed by an upsurge would confirm the same.

However, it should be noticed that the relative strength of the bullish flag could vary considerably against the typical strength suggested by the theory of technical analysis due to smaller gap between the consolidation range, but the pattern is still a bullish flag by its nature and action. Furthermore, the breakout also saw the stock breach the horizontal resistance of $0.078.

The spread between the +- SD of the Bollinger band (20-day simple) has also increased, suggesting that volatility breakout would be a suitable signal to confirm this breakout of horizontal resistance.