Gold and Base metal explorer, Musgrave Minerals Limited (ASX: MGV) has been progressing rapidly at its cornerstone project- the Cue Project which consists of the Moyagee Gold (including Mainland, Break of Day and Lena, along with Evolution JV at Lake Austin North) and Hollandaire Copper areas in the highly prospective Murchison province of Western Australia.

Musgrave’s joint venture partner, Cyprium Metals Limited (CYM) has been advancing base metal targets at Cue through the discovery phase, while reducing Musgrave’s holding costs and allowing it to focus solely on the gold exploration and development at the Cue Project.

As per the latest ASX update, CYM has completed the initial phase I and II of the Reverse Circulation (RC) drilling programme at the Eelya South prospect, totalling 1,138 metres and has also commenced a 900 metre RC drill programme at the Rapier prospect.

Interestingly, all initial phase drillholes under the RC drilling at Eelya intersected the targeted structure with altered and mineralised material observed at the supergene horizon, from a depth of around 30 metres below the ground surface — a positive achievement from an exploration perspective.

Below is the observed mineralisation and assay results of the recent rock-chip samples:

It is expected that the assay results from Eelya South phases 1 and 2 will be released at the beginning of January 2020. 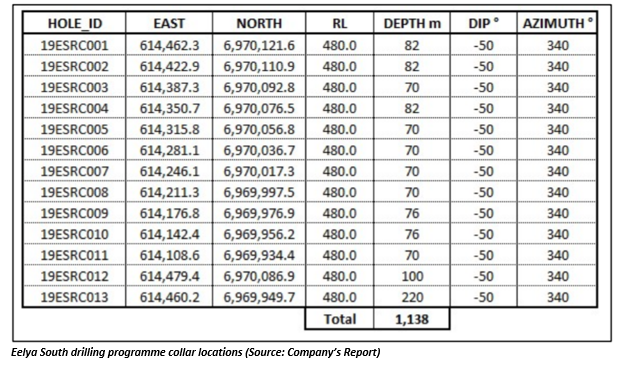 As per latest ASX update, Cyprium Metals has also commenced a metallurgical column test-work at the Hollandaire Prospect on the enormous sulphide mineralisation from the Diamond Drilling (DD) program that targeted the known Cu mineralisation.

The company has been very confident to see the leaching of Cu into solution at room temperature conditions within one hour from the commencement of the test-work.

While CYM is busy exploring the Cue Copper Project, Musgrave has maintained its focus on the exploration of high priority gold targets at Cue, including Mainland, Lena, Break of Day and Lake Austin North.

Musgrave recently reported high-grade gold results from RC drilling at Mainland deposit, with the results similar to the early results at Break of Day, complementing the company’s assessment of the further scope of potentially significant gold discoveries in the Murchison region.

RC drilling has intersected high-grade gold at the Consols Prospect at Mainland, including:

Musgrave is an active explorer with multiple drill programmes currently underway. Over the coming months, the company expects to come up with results of multiple explorations works.

With Musgrave capitalizing on its exploration strengths and accelerating drilling programmes across a range of high priority targets at Cue, it is expected that the current resource figure of 440koz of gold will grow significantly in the near future.