The metallurgical test work conducted by ALS Metallurgy Pty Ltd (ALS Laboratories) at the Nxuu Deposit has concluded that the Vanadium at the deposit is hosted in oxide vanadate DESCLOIZITE, wherein the equivalent mass of Vanadium Pentoxide (V205) is 1.785 times the mass of Vanadium.

In its latest update, MTB has highlighted its intention to conduct a test work program for validating the potential suitability for acid dissolution owing to the oxidised state of vanadium salt/mineral enables, as mentioned below-

The metallurgical test work conducted by ALS Laboratories has highlighted the below key findings:

An inorganic compound, Vanadium Pentoxide (V2O5) is known for its high oxidation state, a feature that makes it both an amphoteric oxide and an oxidizing agent. It is an integral compound of vanadium and finds industry use as a catalyst for alloys. 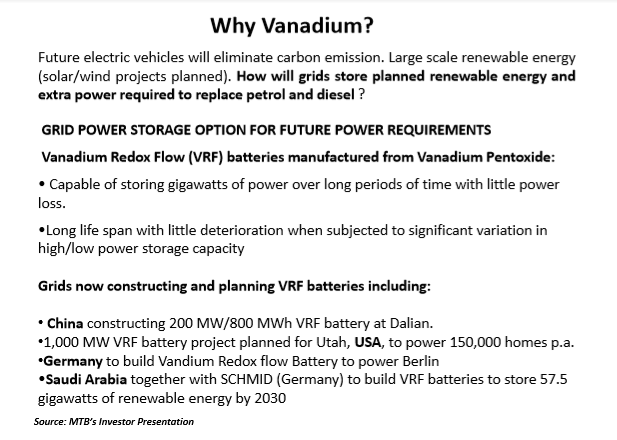 It is observed that 85% of the present global production of V2O5 is generated as a co-product during steel making, extracted from Titaniferous Magnetite deposits in an arduous and expensive process. Countries such as Australia, China, Russia and South Africa have extensive resources of Titaniferous Magnetite, besides Brazil, Chile, Madagascar, Malaysia, Sweden and Finland.

In South Africa, iron is produced from Magnetite via pre-reduction of the Magnetite with powdered coal in rotary kilns, which is further reduced to a slag containing up to 25% V2O5 in arc furnaces, standard at 2000+ o C.

Once the slag is obtained, it is further roast leached in kilns or multi-hearth furnaces (standard at 900 - 1300o C), with sodium carbonate, chloride or sulphate, to produce sodium vanadates.

The sodium vanadates are then leached in water, post which ammonia and sulphuric acid are added to produce precipitated ammonium vanadates.

The ammonium vanadates are heated under controlled conditions with the intent to remove the ammonia and convert the vanadates to various oxide vanadates, which are decomposed in furnaces to produce a V2O5 liquid. The V2O5 liquid is finally cast onto a chilling wheel to deliver the V2O5 powder.

In China and Russia, iron containing ~1.5% Vanadium is produced from Magnetite in blast furnaces at a standard 900 – 1300o C temperatures and removed as a slag containing between 14% to 22% V2O5.

MTB’s recent metallurgical test work at the Nxuu deposit is an exceptionally great achievement, strengthening the Company’s stance as a Vanadium developer, and giving it a substantial competitive edge. With significant recoveries of a marketable product, V2O5 mineralised zones in the Nxuu Deposit is expected to add significant dimension to the overall recoverable Zinc/Lead/Silver/Germanium mineralised zones.

To know more about MTB’s key developments at Bostwana, we encourage you to READ HERE.