Metalicity Limited (ASX: MCT) announced on 3rd May 2019 that the company followed upon the recently identified significant anomalous, layered mafic intrusions at Fraser Range North Project, and mentioned that prior to these announced results, the company reviewed diamond core from historical exploration. Kennecott Explorations Limited conducted the diamond core exploration in the 1980s, which noticed traces of Chalcopyrite and layered mafic intrusions.

In the recent event, the company inspected the drill cores-N3-1 and N1-1 and took samples for polished thin sections, intending to understand the mineralogy of specific fractions within the layer mafic. The company sampled the core at selected lengths and collected a total of 39 samples, out of total sample collected, Metalicity took four samples from N1-1 and 35 samples from N3-1.

As mentioned above, the company took the polished thin sections from both N1-1 and N3-1 drill holes to qualify the sulphide mineralogy present and to understand the mineralogy below the layered mafic units.

Metalicity interrogated the results and included consideration derived from historical petrographic work, which was previously conducted by the Kennecott Explorations Limited. Upon interpretation, the company confirmed the presence of Chalcopyrite and confirmed that the Chalcopyrite is concentrating in the basal sections, which as per the companyâs interpretation is the base of the layered mafic units.

As per the company, the 39 samples were submitted for âNickel Sulphide Collection Fire Assayâ and â âComprehensive lithogeochemical characterisation packageâ Intertek Genalysis, to determine a 73 element/compound suite. Metalicity mentioned that the lithogeochemical investigation revelled fractioned mafic intrusions, which hosts copper values of up to 0.04%. The test work returned a sub-economic grade intercept; however, the management of Metalicity expressed excitement over the identification of anomalous mineralisation in an area which was not targeting the Fraser Range style nickel-copper. As per the company, similar discoveries have delivered globally substantial nickel-copper projects, such as the Nova-Bollinger mine and Silver Knight deposit.

The core sampling confirmed that a geological model of an anomalous layered mafic intrusion is present, and the company conducted a geophysical modelling as well to understand the architecture of the coincident magnetic and gravity anomalies.

As per the company, it ran various structural detection algorithms, which in turn, suggested that both the drill holes, i.e., N1-1 and N3-1 hosts ground, where deep-seated structures/gravity rides are present. The deep-seated structure represents regional conduits for potential mineralisation.

The results from the sampling and the sample length are as: 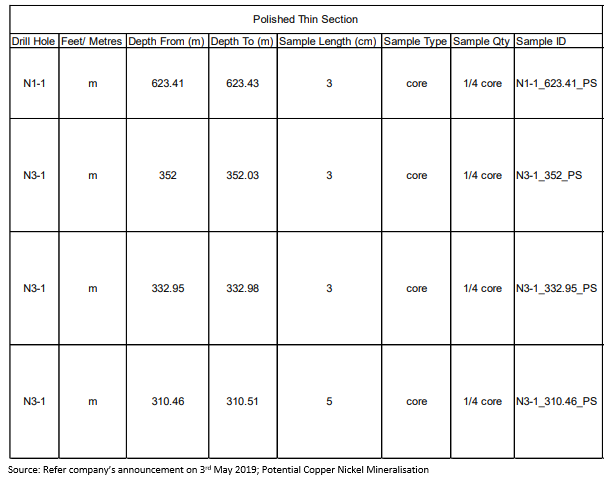 The sample (N1-1_623.41_PS) has a medium to coarse-grained, interlocking texture of columnar plagioclase (~60%, 3-4mm) and partly altered, anhedral to subhedral clinopyroxene (~40%, 1-2mm). Fibrous amphibole has replaced the pyroxene along grain margins and some partings. Plagioclase has been weakly altered to a magnificent mass of zoisite-sericite (saussurite). Minor, irregular forms of magnetite display martitization.

The sample (N3-1_352_PS) is an intensely altered and veined former mafic rock. Although completely altered to sericite, the forms of medium-grained plagioclase have been preserved and occur throughout a groundmass of chlorite and associated fine ilmenite. Medium-grained former titanomagnetite has been pseudomorphed by a leucoxene-limonitic assemblage. Carbonate stringers and veinlets traverse the rock, and minor quartz is also present. Some stumpy tourmaline crystals are associated with the carbonate veining. Minor pyrite containing rare inclusions of chalcopyrite and some secondary magnetite occur in aggregates and discontinuous stringers associated with chlorite and carbonate.

The sample (N3-1_332.95_PS) is a weak subophitic texture has been preserved within this meta-dolerite. Medium-grained former clinopyroxene has been entirely replaced by amphibole (hornblende) and encloses finer grained altered plagioclase. The groundmass contains a granular texture of former clinopyroxene replaced by hornblende and interlocking plagioclase. The feldspar has been partially to totally altered by an outstanding mass of epidote, zoisite and sericite. Former medium-grained titanomagnetite has been pseudomorphed by an ilmenite-leucoxene assemblage. Secondary, euhedral magnetite has formed at the sites of former titanomagnetite. Rare fine pyrite and chalcopyrite are noted.

The sample (N3-1_310.46_PS) is a subophitic texture has been preserved and is defined by altered medium to coarse-grained clinopyroxene enclosing finer grained altered plagioclase. The clinopyroxene has been wholly replaced by amphibole (brown to green hornblende) while the feldspar has been altered by an excellent mass of epidote, zoisite and sericite. Former mediumgrained titanomagnetite has been pseudomorphed by an ilmenite-leucoxene assemblage. Secondary, euhedral magnetite has formed at the sites of former titanomagnetite. Sparse fine pyrite and chalcopyrite are also present. Carbonate stringers are noted.