Accent Group Limited (ASX: AX1), a retailer and wholesaler of premium lifestyle footwear in Australia and New Zealand, reported 22.5% growth in its net profit after tax to $ 53.9 million for FY19. The company, which released its financial results for the year ended 30 June 2019 on 22 August 2019, has more than 420 stores across 10 distinct retail banners. Moreover, the company has exclusive distribution rights for ten global brands in Australia and New Zealand. Some of its popular brands include Dr. Martens, Saucony, Hype DC, Platypus Shoes and The Athlete’s Foot. 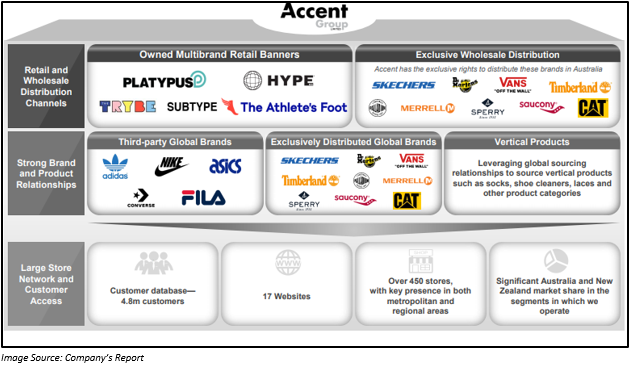 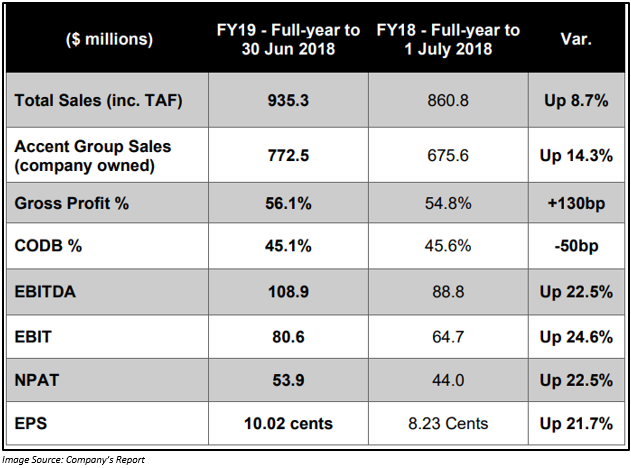 During the period, the company took multiple initiatives as well as kept looking for new growth opportunities. In the Platypus megastores, various in-store customer experience elements were implemented, such as shoe cleaning and monogramming/customisation facilities, digital screens along with permanent DJ booths. Platypus is the largest multi-branded sneaker destination in the region which provides individuals with a broad range of iconic sneaker from across the world.

Other than this, The Athlete’s Foot began the rollout of the advanced foot scanning technology, MyFIT 3D, which provides real-time product recommendations as per the best fit solution by scanning the foot of the customer. The Athlete’s Foot (TAF) is a retailer of athletic footwear and operates across more than 130 stores in Australia and New Zealand. The company also works on offers its customers a market leading omnichannel experience.

The company also expanded into a new market segment during FY19. It acquired Subtype and launched Trybe during the financial year 2019. Another lifestyle footwear concept - PIVOT - would be launched, with the first stores and a website planned to open in FY2020. The new concept would be focused towards providing services to the sport as well as street inspired value conscious consumers via top global brands in sporting goods as well as lifestyle market sections.

In the retail segment, company owned retail sales during the period were driven by digital sales and rollout of new stores in addition to growth of 2.3% in like for like retail sales. For 2019, retail sales increased by 15.8% year-on-year to $ 656.2 million. Around 54 new stores were opened during this period, while 21 stores were closed. With these stats, the number of stores currently stands at 479 along with online sites. Skechers, Platypus, Vans, Dr. Martens, Timberland and Merrell under the umbrella of Accent Group traded strongly in FY2019. Sales registered by the company’s brands including TAF, Hype and Subtype were in line with what AX1 had expected. The total digital sales, which included click-and-collect and click-and-dispatch, went up by 93%. Through the integrated inventory model, the customers were able to access the complete inventory base through click- and-collect, click-and-dispatch as well as endless aisle.

In the wholesale segment, the company reported a year-on-year increase of 7% in sales to $ 116.3 million. Growth can be attributed to solid performance in brands including Merrell and CAT, Dr. Martens, Vans and Stance. Skechers wholesale sales remain consistent as per the company’s expectation; however, they were lower than the previous year.

Factoring in the continued strength of new store performance and the availability of new deals in the market, the company has plans to open more than 40 new stores in FY2020 across Hype, Platypus, Skechers, Dr Martens, Cat, Merrell, TAF and Vans. There is also a scope for the opening of additional 30 to 40 new stores in FY2022 under these banners.

Accent Group would continue to establish a robust network of corporate stores under The Athlete’s Foot. At present, the Group has forty-nine TAF corporate stores, which included the repurchase of the New Zealand master franchise. The company expects that by end-FY2020, there would be 65 corporate stores. Through the corporate store program, the company is expecting an addition to the group profit growth in FY2020, which would be derived from the annualisation of the stores acquired as well as opened in FY19. The Group profit growth would also be achieved through additional new stores which would be acquired and opened in FY2020 along with the growing TAF support office costs.

Under the digital segment, the company expects to register continued strong growth. In the next 3 years, the company is targeting 20% growth in digital sales, driven by improving customer experience on digital platforms, development of 17 brand websites and better targeting its customer base by utilising their 4.8 million strong database along with the new web-based Artificial Intelligence driven CRM technology.

After the launch of kids focused online site, The Trybe in October 2018, the company opened three stores at Highpoint, Fountain Gate and Werribee in Victoria. Another store was opened at Macarthur Square in New South Wales. The performance of these stores was ahead of the expectations, and up to 12 stores are expected to be opened by June 2020.

During November 2018, the company launched a range of Hype, Platypus and TAF branded socks, accessories, laces along with shoe cleaners which performed better than expected and generated $ 4.5 million of sales in FY2019. By FY2020, the company expects sales from this program to grow to at least $ 15 million.

The like-for-like (LFL) retail sales in the first seven weeks of FY2020 reported an increase of 2.7%. The company expects a low single-digit LFL growth in FY2020 and strong growth from digital sales, in addition to 40 new stores, 54 stores annualising from FY2019, and 65 existing and new TAF corporate stores. Moreover, percentage related to gross profit margin and the cost of doing business is expected to be at par with FY2018.