A slowing economy and tepid inflation at home made the Reserve Bank of Australia (RBA) to bring the benchmark rate to a record low of 1 per cent on 2 July 2019, the second consecutive cut in the official cash rate since 2012. As a result of this cut, major central banks in the country reduced their interest rates to pass on the cut to their clients by easing their monetary policies.

Moreover, Liberal-National coalition retained its power in the May election and is clinching support towards clearing the $158 billion income tax cut package, proposed by the party during the federal election. If this package gets passed, high-income earners would take the most advantage.

These initiatives by both the government and RBA are aimed towards the economic welfare of the country.

Developments in the domestic as well as international market decide how most of the asset classes would perform and generate returns. Several people still consider keeping their money in bank accounts or making money through fixed income. Though these options make money for them, there are other better alternatives as well that make the money earn money.

One of the best options is to invest in stocks with high dividend yield, as these are the companies that generally perform well and have a profitable business, backed by their time-tested business models. Companies pay dividend when they earn profit and intend to share the same in full or partially with their shareholders as a reward towards their faith in the business.

Stocks paying dividend generally tend to perform better than the average stock over a long-time period, resulting in flowing more money into the investors’ bank account. Such stocks have a lower beta than the broad market beta. Beta calculates the volatility of the price. Thus, dividend-paying investments can be a powerful addition to an individual’s portfolio.

Why invest in dividend payers?

The equity market in Australia has emerged out to be the second-best performer (year-to-date) among major stock markets in the Asia-Pacific region after China. Let us discuss some of the dividend paying stocks listed on ASX.

Accent Group Limited (ASX: AX1) is engaged in the retail and dispersal of performance and lifestyle footwear throughout Australia and New Zealand region. The company holds exclusive rights to distribute 12 international brands as well as operates 465 stores across 10 different retail banners.

Recently, the company presented its half- year results for FY19, under which it highlighted that it announced an interim ordinary dividend of 4.50 cents per share to shareholders registered with the company on 07 March 2019. The fully franked dividend was paid on 21 March 2019 and represents 79.1% of the diluted earnings per share in the first half period ended 30 December 2018 and is up 50% from the interim dividend paid for the same period a year ago. 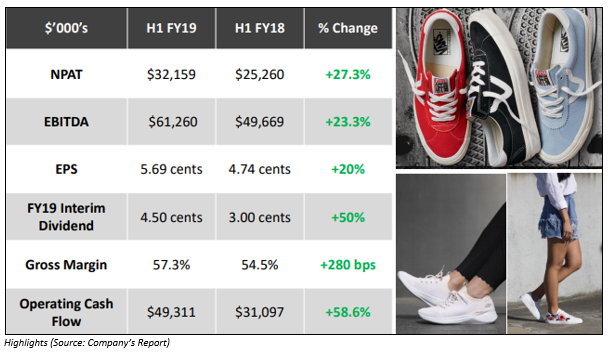 Considering strong profit growth and operating cashflow in the first half of the financial year 2019 and expectations related to continued growth in the second half, the company’s board decided on realigning the dividend payout ratio to reflect the cashflow generated and EPS in each half.

For the financial year 2019, the company is expecting to make a fully frank dividend pay-out in its stated range of 75% to 80% of profit after tax.

Listed on ASX in December 2013, National Storage REIT (ASX: NSR) is amongst the leading providers of self-storage solutions in Australia. The company offers a wide rage of services including self-storage, business storage, insurance, and vehicle and trailer hire to its residential and commercial customers in both New Zealand and Australia.

The company raised $ 170 million from a fully underwritten placement of 99,415,205 new ordinary stapled securities at a price of $1.71 per stapled security, according to an NSR announcement on 26 June 2019. The placement was made to institutional and professional investors.

On 25 June 2019, National Storage REIT unveiled that the company had settled more than 20 new acquisitions worth $ 235 million in its key markets of Australia and New Zealand since 31 December 2018. Of the total acquisitions, two were high-quality portfolio deals. Its total acquisitions for the financial year 2019 till date are worth $ 370 million. The company hopes to settle additional acquisitions valued at nearly $ 100 million by the end of the first quarter of FY20. 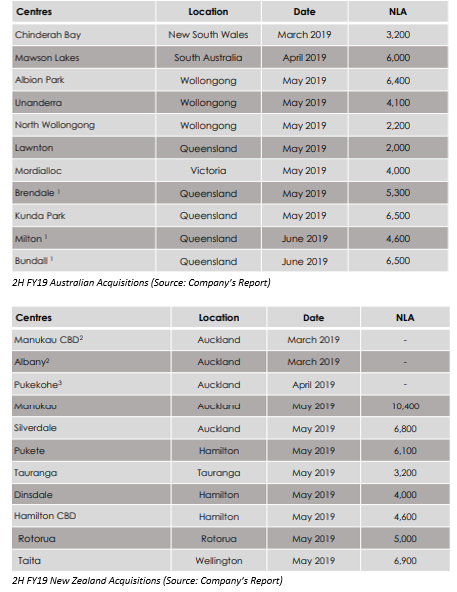 NSR made a notification regarding dividend distribution on 24 June 2019. The company announced a A$0.051 dividend on fully paid ordinary shares related to a period of six months ended 30 June 2019. The dividend had a record date of 28 June 2019 and to be paid by 5 September 2019.

Dicker Data Limited (ASX: DDR), which was listed on ASX in January 2011, is a specialist IT hardware distributor of various prominent brands. The company also provides software, cloud and Internet of Things solutions to its reseller partners.

According to an ASX announcement on 1 July 2019, the company and Honeywell entered a distribution agreement, effective from the same day. The deal covers both the Australia and New Zealand region. The distribution agreement gives DDR complete access to the entire AIDC range, including ruggedised scanners, industrial printers, enterprise mobility tablets and their industry leading Mobility Edge platform.

Moreover, the company launched a new business, named Dicker Data Financial Services (DDFS). The new entity would focus on catering to increasing demand for Device-as-a-Service (DaaS) and Infrastructure-as-a-Service (IaaS) solutions, in addition to the shift from capital expenditure to operational expenditure.