Scott Morrison clinches crossbench support to pass the $158 billion tax package, it proposed during federal election. The government gets support from the Centre Alliance Senator, Rex Patrick and Tasmanian Independent Senator, Jacqui Lambie. Also, two other Senators have backed the tax package taking the total to four crossbench votes secured by the government. With the crucial support won by the Morrison government, Australians are expected to get their cash back as soon as next week.

Do You Know About $158bn Income Tax Cut Package?

About 94 per cent of the Australian taxpayers will face the maximum personal income tax rate of 30 per cent from July 2024 under the $158 billion income tax cut package proposed by the Morrison government.

Quite Confused? Let us go into some detail. Firstly, take a look at the current resident tax rates for 2019-20 in the below table: 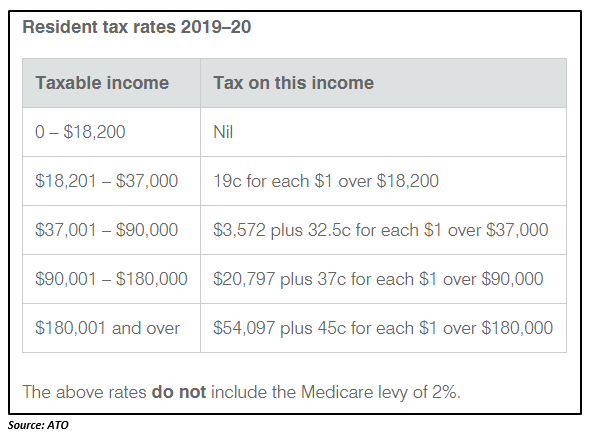 Who Gains When The Tax Package Will Be Fully Effective?

When the $158 billion tax package will take full effect, the marginal income tax rates will be 19%, 30% and 45% (plus the 2 per cent Medicare Levy). The tax package is expected to benefit the high-income earners the most as they currently fall under the 47 per cent tax bracket (including Medicare Levy) which would be reduced to 45 per cent later on.

A Medicare levy of 2 per cent of the taxable income has to be paid by the income earners in Australia to fund some of the costs of universal health insurance scheme, Medicare.

Reason Behind Centre Alliance’s Support for the Tax Package

The Centre Alliance has secured policy commitments from the federal government in return for crossbench support of the tax cut package. The Centre Alliance demanded measures to reduce the gas prices and support to ensure sufficient gas supply in the market by changing the Australian domestic gas security mechanism. In June this year, Centre Alliance senator, Rex Patrick raised concerns over the horrifying energy price rises in Australia and wanted the federal government to consider an Australia-wide gas reservation policy.

The federal government had talked through gas reforms with Centre Alliance Senators, informed Finance Minister Mathias Cormann. In return, the Senators supported the government’s full tax cut bill. The party entered into a deal with the government with the following demands:

Reason Behind Tasmanian Senator’s Support for the Tax Package

The Tasmanian Senator, Jacqui Lambie supported the government’s tax package in return for the demand to forgive Tasmania's public housing debt. The Senator negotiated with the government to forgive the $157 million housing debt her state owed to the Commonwealth. Tasmania's housing sector has witnessed many people becoming homeless due to a lack of public funding. The Senator will work with the government to find a solution to this endemic problem. Senator Lambie puts forward her view that she could not support the income tax cuts when her home state has thousands of low-income earners struggling with homelessness. She had been given an undertaking from the federal government that it will respond to the issue.

Besides amendment in the tax laws, Mr Morrison is also dealing with the other issues persisting in the Australian economy. Let us have a look at two of such issues below:

At the G 20 summit meeting in Osaka, the Australian Prime Minister, Scott Morrison had conversations with the US President Donald Trump and China’s leader, Xi Jinping. According to Mr Morrison, it is unrealistic to expect a quick resolution of the trade dispute between the US and China. He believes that there are some real, difficult and substantial issues that are to be resolved.

The trade war between the two largest economies of the world aggravated when the US President, Mr Trump, decided to raise the tariff on the Chinese goods to 25 per cent from 10 per cent. The equity markets across the world tumbled with Mr Trump’s decision. The situation worsened when China also announced retaliatory tariffs on US goods in answer to Trump’s threat. However, the US and China held talks at the G 20 summit meeting to resolve the trade conflicts. Following the meet, the US President decided to not impose further tariffs on Chinese exports. According to the market experts, a continuation of the trade war further could possibly shipwreck the global economy.