A Glance At Recent Fiscal And Monitory Policy Developments

In Australia, the federal government and the Reserve Bank of Australia are taking initiatives for the economic welfare of the country. The Coalition government is working hard to convince the Senate crossbench to approve the $158 billion in tax cuts. Besides this effort on the fiscal policy front, the central bank has also reduced the interest rates recently in an effort to aid employment growth. The article discusses these ongoing macro developments in the Australian economy in some detail.

At a meeting of the shadow cabinet held recently, the Labor Party put forward some demands that were immediately rejected by the government, resulting in higher chances of the proposal implementation.

Labor demanded a split in a bill of Coalition’s three- stage $158 billion tax package in the meeting. Labor also wanted the government to deliver the change proposed in the second stage of Coalition’s tax-plan in July this year. In the government’s tax plan, the change is decided to be effective 1st July 2022. The party has also refused to support the third stage of the tax package, which is due to begin in 2024.

The Finance Minister of Australia, Mr Mathias Cormann, has rejected the proposal put forward by the Labor on splitting the tax package. The Minister specified that their tax plan prioritizes the low and middle-income earners, which is extremely important for the Australian economy. He opposed Labor’s idea of delivering income tax relief to all working Australians.

What is Coalition Government’s Tax-Plan

Scott Morrison’s Coalition government had a miraculous win in the federal election last month. The government promised before the election to legislate the income tax cuts for low and middle-income earners when it would come to power. In an effort to fulfil its promise, the Coalition is trying to close a deal with the Senate crossbench for the approval of full $158 billion in tax cuts.

The Coalition’s tax cut plan is explained in three stages below: 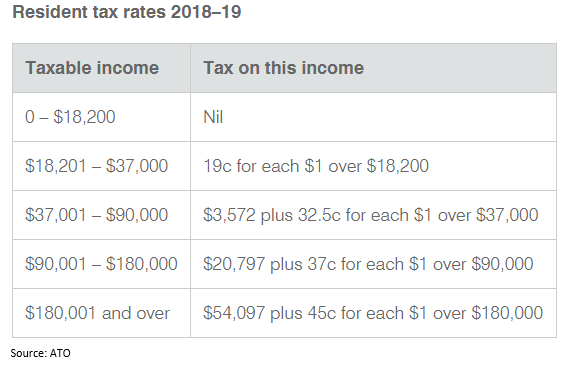 In Australia, the tax rates charged on a person increases with an increase in income. In other words, Australia follows a progressive tax rate system. Australia is also one of the highest taxing countries across the globe. The pay-as-you-earn system was introduced in 1942 in Australia, under which the employers deduct the taxes from the employees’ income. The taxpayers need to lodge an income tax return at the Australian Taxation Office after every financial year. The Australian Taxation Office does not review each and every person’s return. Instead, the assessment of the income is taken to be true.

The current tax-free threshold for Australian residents is $18,200, which means that a person earning below this income is not required to pay any tax. However, the highest tax rate for individuals is set at 45 per cent. An Australian resident has to pay taxes on all sources of income, including the income earned overseas.

The Australian economy has undergone several fluctuations this year that convinced the Reserve Bank of Australia to proceed with the interest rate cut in June this year. The RBA cut the interest rates by 25 basis points to 1.25 per cent in June for the first time in three years in order to support the employment growth and help inflation reach the target. The National Australia Bank Limited (ASX: NAB) expects the central bank to undertake another rate cut in November 2019 for the stabilization of the economy.

The Reserve Bank of Australia has also recently signalled further interest rate cuts to help boost households’ confidence and encourage employment growth. However, the bank recognized that the monetary policy alone would not assist in reducing the rate of unemployment. The other factors, like structural reforms and infrastructural investment, also play a key role in supporting the growth of the Australian economy.

The key drivers of the rate cut are explained below:

The inflation results released by the Australian Bureau of Statistics for the March quarter 2019 were disappointing. The headline consumer price index (CPI) remained steady during the quarter against the expectation of a 0.2 per cent rise in headline inflation. The inflation data raised the speculations of a rate cut by the RBA.

The unemployment rate that rose unexpectedly to 5.2 per cent in April 2019 was the biggest contributor to the interest rate cut move. The rise in the unemployment rate was the highest such rate recorded in the last eight months to April 2019. However, there were more addition of jobs to the economy during the month relative to March 2019 figure.

The below table shows seasonally adjusted estimates and the trend estimates of labour force data reported by the Australian Bureau of Statistics in April 2019:

The Australian housing market has witnessed a downturn in 2019, owing to the falling property prices. The housing prices fell across all the capital cities in Australia in the three months ended 31st March 2019. Sydney posted the largest fall of 3.9 per cent followed by Melbourne where prices fell 3.8 per cent.

The table below shows the percentage change in the housing prices in Australia across eight capital cities during March quarter 2019:

The falling property prices and the weaker inflation figures induced RBA to the downgrade the forecasts of consumption growth and dwelling investment levels. Besides this, the RBA also downgraded the economic growth forecast from 3 per cent in 2019 and 2.75 per cent in 2020.

However, the recent Home Value Index data released by a property consultant has indicated that the Australian housing market is recovering slowly. It was found that the fall in property prices in May 2019 (0.4 per cent) was comparatively lower than the fall witnessed in April 2019 (0.5 per cent). The reason for this improvement could be the ease of lending rules proposed by the Australian Prudential Regulation Authority.