Gold Road Resources Limited (ASX: GOR) owns 50% interest in the world-class Gruyere mine and has an outstanding exploration portfolio centred on the under-explored Yamarna Greenstone Belt. The main focus of Gold Roadâs exploration activities continues to be the discovery of multi-million-ounce deposits or clusters of deposits that can underpin a new standalone gold mine development. The company has low levels of debt and has plans to generate strong cash flow from Gruyere. Combined with the Gold Road team, the company has all the ingredients required to create wealth for its shareholders.

Today (14 June 2019), S&P Dow Jones Indices announced that Gold Road Resources Limited will be added to the S&P/ASX All Australian 200 Index on June 24, 2019, subject to shareholder and final court approval of the scheme of arrangement, whereby Navitas Limited (ASX: NVT) will be acquired by an investment consortium. The shares of Gold Road Resources increased by 5.556% during todayâs intraday belt.

The significant exploration potential of the Yamarna Belt combined with the well-funded and successful exploration team at Gold Road is providing the company a platform for the next stage of value creating growth.

Recent exploration results in the Southern Project Area, particularly at Gilmour and other advanced prospects such as Smokebush and Toppin Hill are very exciting and provide the company with the opportunity to start building up a resource base on its 100% owned tenements during 2019. This well?funded mid?tier gold development and exploration company recently reported positive diamond and reverse circulation (RC) assay results from its exploration programmes. 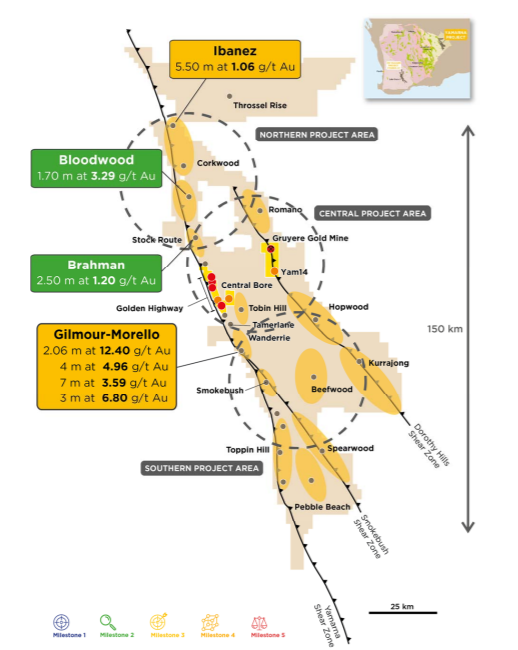 Currently, a diamond drilling program is in progress at Gruyere to enable further optimisation of the mine plan and infrastructure. The first drilling for 2019 provided a better understanding of the geological controls to economic gold mineralisation on the Gilmour and Morello prospects. At Morello, the company has identified various potential shoots, which will be assessed with further drilling.

The company is embarking on a new drilling programme at Gruyere to allow it to further optimise and increase the near-term value to be delivered from the mine while the company edges closer to its initial gold pour and subsequent commercial production. Last year, the company witnessed significant progress in the development of the 6.6 million ounce Gruyere Project, as the Gruyere JV (Gold Road 50%, operator Gold Fields 50%) moves toward the June 2019 quarter target of the first production.

The company is having an approved total exploration budget of $20 million across the project areas, of which $17 million will be allocated to the companyâs 100% owned Yamarna tenements, $1.5 million to the Gruyere JV (100% basis) and $1.5 million to the Cygnus JV. The 2019 programme has been planned to include 40,000 to 50,000 metres of RC and diamond drilling, and approximately 75,000 metres of aircore drilling as well as geophysics across approximately 200 square kilometres of unexplored tenure.

In 2019, the company is focused on defining the full extent of the mineralised system on the Gilmour-Morello Project prior to the infill drilling at Gilmour in support of a maiden Mineral Resource. As at 31st March 2019, the company had cash at bank of $49 million, with $117 million of undrawn debt facilities. Gruyere expenditure incurred during 2019 March quarter was $47 million on development and $10 million in JV Support Costs (100% basis).

Murchison Region operations, including the Mekatharra Gold Operations and Cue Gold Operations are a massive aggregation play. During the 2019 March quarter, Meekatharra Gold Operations (MGO) output was in line with the previous quarter at 23,333 ounces. Lower grade production sources processed in the quarter translated to higher costs with cash cost (C1) increasing by 7% to $1,346 per ounce. During the quarter, the Cue Gold Operations (CGO) continued its ramp-up in gold output as open pit ores from the Day Dawn pits and higher-grade stope ore from the Comet underground began to dominate ore blends. The Gold production increased by 37% over the previous quarter to 20,108 ounces and cash costs (C1) reduced by 37% to $1,076 per ounce.

At its Fortnum Gold Operations (FGO), the company kept improving its gold output with higher grades from the first virgin ores at Starlight positively contributing to an increase of 24% over the previous quarter to 17,019 ounces. The first extensional drill programs at FGO produced excellent drill results during the quarter, demonstrating great potential for orebodies to extend at depth in the Starlight and Trevâs ore systems.

In March 2019, the company added to its gold hedge book a further 30,000 ounces at a fixed forward rate of $1,863.35 per ounce for delivery in April, May and June of 2019. Recently, a revised sale agreement for the groupâs lithium royalties was agreed for $15 million in cash, settlement of which is expected in the June quarter. Westgold Resources recently announced the sale of the Higginsville Gold Operations (HGO) to RNC Minerals (RNC) for approximately $50 million with Westgold receiving approximately 50% of the total consideration in cash and 50% of the total consideration in RNC shares.