Splitit Payments Ltd (ASX: SPT), based in Sydney and headquartered in Tel Aviv, Israel, offers credit card-based instalment solutions to merchants and businesses in over 27 countries. Incorporated in 2008, the company’s market capitalisation stands at around AUD 256.17 million to date. It debuted on the ASX on 29th January 2019 after an oversubscribed initial public offering (IPO), which raised AUD 12 million upon the issue of 60 million shares (AUD 0.20 each) to institutional and sophisticated retail investors.

With approximately 269.66 million outstanding shares, the SPT stock last traded at a price of AUD 0.950, on 15th May 2019. Thereafter, the securities of Splitit Payments were placed in a trading halt at the request of the company, pending the release of an announcement. The halt is expected to last until the earlier of the commencement of normal trading on Monday, 20th May 2019 or whenever the announcement is released to the market.

Splitit has now processed over 160,000 purchases and AUD 128 million of Underlying Merchant Transactions to date and still has not suffered any losses from bad debt during its operating history, demonstrating that Splitit’s business model and solution are robust and low risk.

Recently, Splitit Payments reported a record-breaking first quarter ended 31st March 2019, whereby the company continued to experience strong growth across its key performance metrics. This is despite the given seasonality with the March quarter, typically being the slowest quarter for retail sales (industry wide). 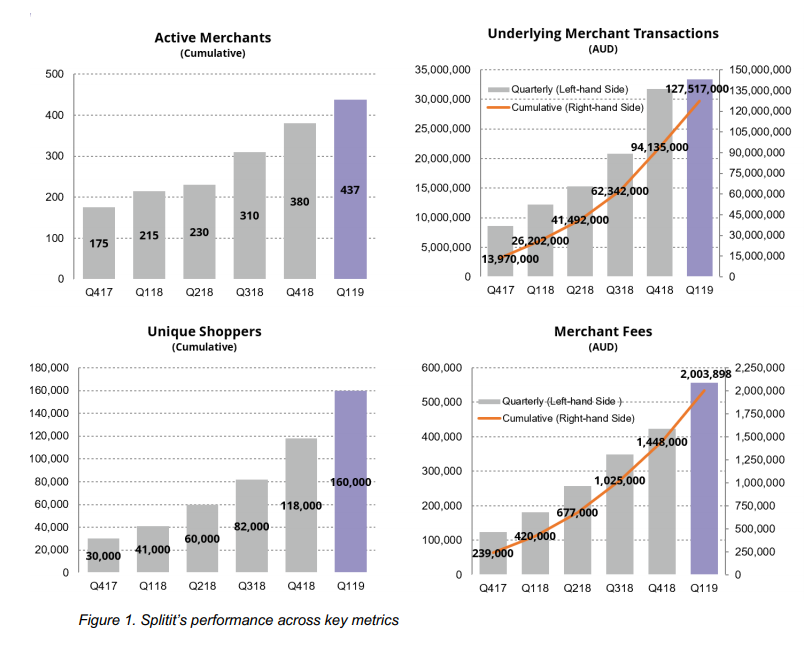 Around 57 new Active Merchants and 42,000 new Unique Shoppers started using Splitit in the March quarter, reflecting an increase of 103% and 290% year-on-year respectively.

The Total Underlying Merchant Transactions since launch to the end of Q1 CY19 amounted to AUD 127 million, with the Q1 CY19 period alone delivering AUD 33 million, up 3% on the previous quarter (which includes Christmas peak season trading uplift), and up 168% year-on-year. Besides, the Total Merchant Fees since launch to Q1 CY19 stands at AUD 2 million, with the March quarter being an excellent month for the Company, reaching AUD 556K. Moreover, the Merchant Fees are up 31% on the previous quarter and 207% year-on-year.

Splitit has over 500 merchants currently engaged in various parts of the sales cycle including, large global enterprise merchants from the US, Canada, Australia, UK, Italy, France and Singapore. In addition, there is an inbound enquiry request from many other countries as well.

Besides, it also has a major pipeline of signed merchants in the process of integration includes several large high-turnover merchants from industry verticals such as fashion, power tools, medical and jewellery.

As for the projects, Splitit’s latest developments include the launch of ‘Get Now, Pay Later’ solution and developing plugins to support BigCommerce (a leading e-commerce platform). Moreover, work has commenced on developing a plugin to IBM WebSphere and other e-commerce platforms as well as a digital wallet.

The Company reported net operating cash outflow of AUD 3.58 million for the quarter and held AUD 9.18 million in cash as on 31st March 2019.