Australia is comprised of a well-established gold ore mining industry with revenues boosting on the back of global economic conditions and higher domestic gold prices. The industry has witnessed rapid growth over the past decade, with gold being considered as ‘The Safe Asset’ at the time of national and global economic uncertainty.

Ramelius Resources Limited (ASX: RMS) is engaged in the exploration, mine development, production and sale of gold. The company recently updated the market about a change in the shareholding of Van Eck Associates Corporation and its associates. The voting power of the shareholder has reduced from 6.54% to 5.53%.

Production Update: In the production update for June quarter, the company reported total gold production of 47,342 ounces, which falls within the guidance range of 45,000 to 50,000 ounces of gold. Production for the entire year stood at 196,679 ounces of gold against the guidance range of 190,000 to 210,000 ounces. At the end of the quarter, the company had cash and gold balance of $106.8 million. The production was further divided into 18,913 ounces pertaining to Mt Magnet, 11,757 ounces pertaining to Vivien and 16,672 ounces to Edna May.

During the June quarter, the company incurred an expenditure of $23.3 million in acquisitions and capital development. This comprised of the acquisition of Explaurum Ltd for a consideration of $0.5 million. The total project development costs for the period amounted to $22.8 million.

LOM Plan: The company outlined a comprehensive five-year Life of Mine (LOM) plan to provide clarity around production and costs moving forward. As per the plan, the company anticipated gold production to exceed 1 million ounces mark over the five-year period. The plan will be underpinned by growth in resources and reserves. The company has planned to initiate the development of Marda Project in FY20, followed by Tampia Hill Project in FY21.

Outlook: The significant capital investments made during the year puts the company in an excellent position to meet the production and cost targets outlined in the Life of Mine plan.

Dacian Gold Limited (ASX: DCN) is engaged in the mineral exploration and development of its 100% owned Mt Morgans Gold Operation.

The company recently released the preliminary operating results for the June quarter. Gold production for the quarter stood at 36,658 ounces, meeting the updated production guidance of 36,000 to 38,000 ounces. All-in-Sustaining Cost for the quarter was reported at $1,519/oz, which was close to the lower end of AISC guidance of $1,500 to A$1,600/oz.

Updated Life of Mine Plan: The company also issued the updated Life of Mine plan and FY2020 guidance for Mt Morgans Gold Operation. As per the updated eight-year LOM plan, the company expects average annual production of 170,000 ounces over the first five years, i.e. from FY2020 to FY2024. The AISC for the five-year period is expected to be in the range of $1,340 to $1,440/oz. Total production during the eight-year period has been planned at 1.1 million ounces at an AIC of $1,280 to $1,380. Over the period, consolidated AIC is anticipated to be between $1,330 to $1,430/oz.

Cygnus Gold Limited (ASX: CY5) is engaged in the exploration and discovery of gold and base metals deposits in the southwest portion of Yilgarn in Western Australia.

The company recently updated that it has restarted drilling activities on the Lake Grace JV with Gold Road Resources Ltd. The company expects the drilling program to continue for up to three weeks with the final results expected in August.

Quarterly Activities: During the quarter ended 31st March 2019, under the Stanley Project, the company’s exploration activities included RC drilling at the McDougall South prospect. Results from the drilling programs regarding testing of gold targets across the prospective Stanley greenstone were received. 231 soil samples were collected at the Bencubbin North nickel project with results from the soil program expected in the second quarter of 2019. 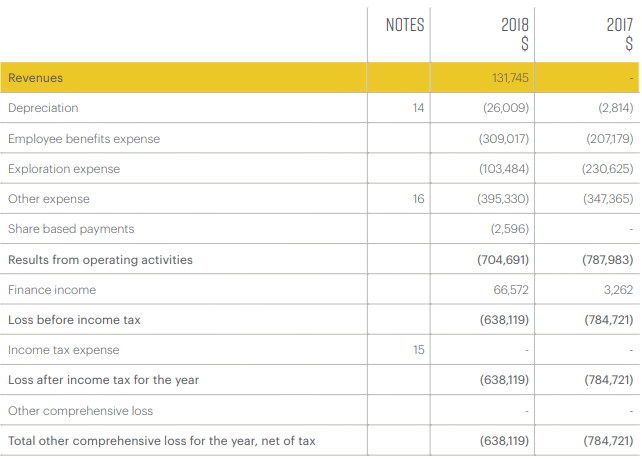 The company recently reported assay results from the maiden grade control reverse circulation drilling program. The drilling program pertains to the M1 South deposit at the Sanbrado Gold Project. Initial drill holes from the program returned high-grade results, including 27m at 8.7 g/t Au. The management stated that the company is on track to achieve commercial gold production in the second half of 2020, with construction activity progressing on time and budget.

Key Highlights of March Quarter: During the quarter, the company incurred project expenditures amounting to $25.9 million and administration costs for the period stood at $1.5 million. As at 31st March 2019, the company had cash at bank amounting to $37.2 million. 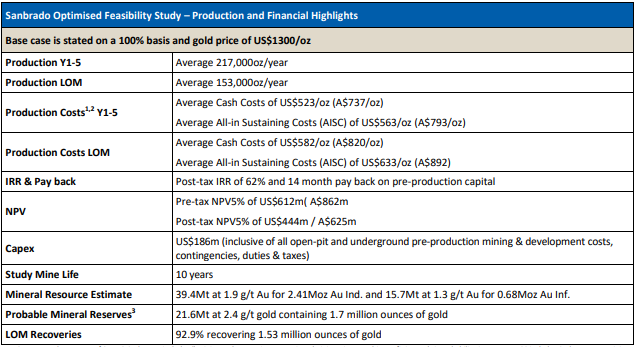 Resolute Mining Limited (ASX: RSG) is primarily engaged in the gold mining and exploration of minerals. The company recently updated that the Syama Underground Mine witnessed a commercial ore production rate exceeding 80% of the nameplate mine capacity. The mine is expected to produce approximately 2.4 million tonnes of ore per year.

In the June quarter, the company has seen substantial progress in the development rates, drill and blast performance and sublevel cave drawpoint availability. Based on the company’s current performance, ore hauled to the run-of-mine pad for the June quarter is expected to be approximately 320,000 tonnes, which is double the hauled tonnes achieved in the previous quarter.

March Quarter Updates: During the quarter, the company recorded gold production of 98,105 ounces at an AISC of $1,039/ounce. Gold production went up by 33% and AISC declined by 24%. Syama site production for the period stood at 84,552 ounces, up 50% on the prior quarter. During the quarter, the company signed a new Mali Mining Convention, which led to improved fiscal and operating conditions for Syama. As at 31st March 2019, cash, bullion and listed investments amounted to $86 million. As per the update provided for the December quarter, the company has also implemented the forward sale of 30,000 ounces of gold between July 2019 and December 2019. 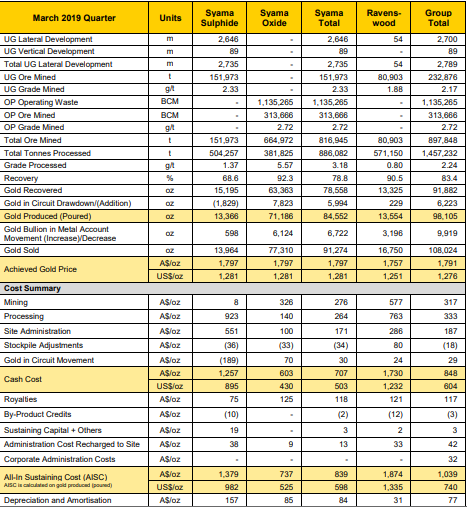