Eclipse Metals Limited (ASX:EPM) is an Australia-based exploration company, focusing on multi-commodity mineralisation across the tier 1 mining jurisdictions of Queensland and the Northern Territory. Besides its flagship Devil’s Elbow U-Au-Pd Project, the Company has key projects focused on manganese, vanadium, gold, platinum, and palladium in its portfolio.

Alligator Rivers Uranium Province (ARUP) is a prolific uranium province accounting for almost 96% of the historic uranium production and 95% of the known uranium resources of the entire Northern Territory. The province is home to world-class uranium mining operations of majors including Rio Tinto and Cameco. 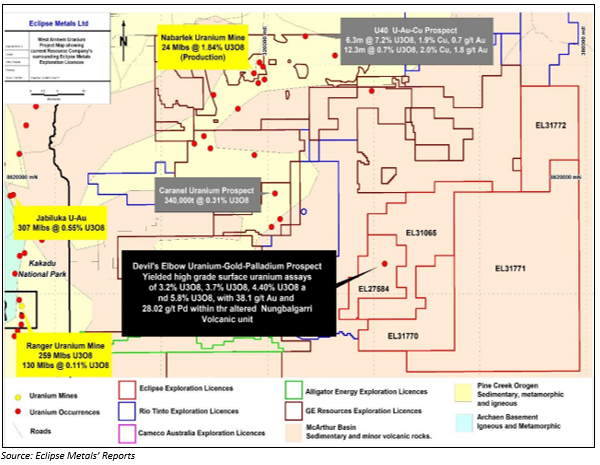 Early last month, the Company secured grant of EL27584 at Devil’s Elbow Prospect. Securing exploration tenements in ARUP is unusual and is expected to reflect value generation for Eclipse Metals in the future.

The greenlight to explore the project area comes at a time when a major uptick is anticipated in uranium prices, as a result of the global shift towards clean energy sources. The Devil’s Elbow deposits have strong similarities with the iconic 1971-discovered Jabiluka U-Au mine.

A total of 17 priority drilling targets have been identified and prioritised for the upcoming drilling program at the wholly owned Devil’s Elbow project. 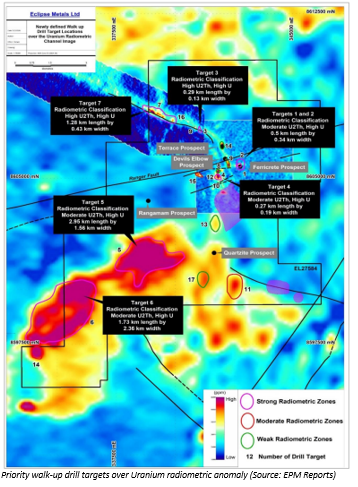 The Devil’s Elbow deposit is understood to be geologically similar to the Jabiluka deposit, which held 67,700 tonnes of U3O8 ores as mineral reserves complemented by 16,440 tonnes at 0.36% U3O8 as Measured and Indicated mineral resources and 57,500 tonnes of 0.48% U3O8 of Inferred mineral resources, with additional gold resource of 380,000 ounces.

The weak radiometric anomalies coincide with uranium mineralisation at Devil’s Elbow, which yielded uranium assays with U3O8 grades varying between 3.2% and 5.8% with 38.1 g/t Au and 28.02 g/t Pd.

Eclipse Metals has planned an on-site exploration program, anticipated to commence soon, with the program focusing on the ground around the Devil’s Elbow, Terrace and Ferricrete uranium prospects.

The exploration program would include a helicopter supported diamond drilling program to uncover the presence of large uranium-gold mineralisation, as expected from the geological and geophysical data.