A new entrant to the ASX in 2011 was Australian mineral exploration company, Eclipse Metals Limited (ASX:EPM), which held highly prospective uranium tenements in Northern Territory. The Company utilised the downtime in the uranium market led by Fukushima disaster to grow its portfolio to manganese, vanadium and precious metals including gold, platinum and palladium prospects in Northern Territory and Queensland, while also advancing on its uranium projects.

The same confidence was shown by the Company’s investors with no major investors pulling out their investments since 2011, which is truly a remarkable milestone for EPM.

While the Fukushima disaster in 2011 adversely impacted the uranium industry, leading to reduction in demand and price, and in turn closure of several supply sources, the COVID-19 pandemic has reinvigorated us to move to cleaner, reliant and sustainable power sources.

A major transition from thermal to nuclear power generation might be anticipated. Though demand gap following the Fukushima disaster has already been filled, about 55 nuclear reactors are under construction, consequently, demand for uranium is expected to surge in future, mostly from the Middle East and Asian countries.

Uranium prices have surged significantly due to supply disruptions amid the pandemic and the positive shift in global energy market has created a renewed interest in uranium, unarguably one of the cleanest energy sources.

The region hosts the Ranger Uranium Mine, as well the mega world-class Nabarlek high-grade uranium and copper mine. Alligator Rivers Uranium Province (ARUP) is a prominent and world-class uranium province in terms of uranium endowment and geological setting, attracting mining majors including Rio Tinto and Cameco. The province holds the potential to host another Ranger or Nabarlek, as believed by both Rio Tinto and Cameco.

Almost 95% of known uranium resources and 96% of past uranium production of the entire Northern Territory can be accounted to ARUP. Securing exploration tenements in ARUP is unusual and will possibly reflect in the value generation for Eclipse Metals in future. Carl Popal, Chairman of Eclipse Metals, describes ARUP as ‘a geologist’s heaven’. 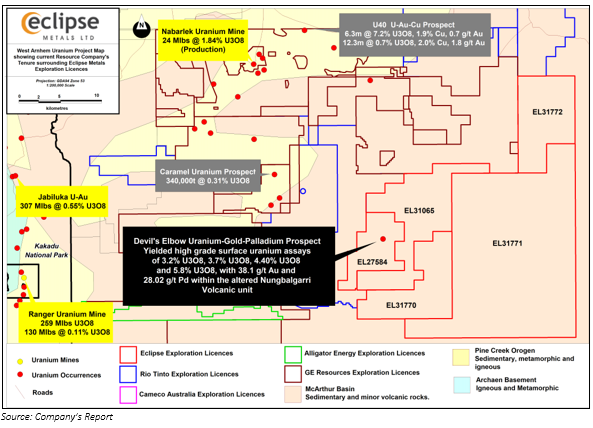 Subsequently, Commonwealth Minister for Indigenous Australians, Honorable Ken Wyatt also issued an advice of consent for the Devil’s Elbow project. Finally, in the first week of June 2020, the Exploration Licence EL27584 at the Devil’s Elbow Uranium, Gold, Palladium Project was granted by the Northern Territory’s Department of Primary Industry and Resources to North Minerals Pty Ltd, a wholly owned subsidiary of Eclipse.

Consent by landowners, government support and finally, granting of the exploration licence, are important milestones for Eclipse Metals, which now plans to advance on the detailed exploration program in 2020, seeking uranium, gold and palladium mineralisation within the tenement area.

Eclipse Metals has observed steady and sustainable growth in its share prices, with advancement on its project. From $0.005 at end-February 2020, the stock price has grown tremendously, closing the day’s trade at $0.009 a share on 11 June 2020, highlighting an increase of 12.5% from its previous close. In the last three-month and six-month period, the stock has delivered a return of 60% and 100%, respectively.

Despite headwinds arising from the pandemic, Eclipse’s focus on the project advancement has enabled investors and shareholders to gain substantial returns on their investments.

Best intersections from the Amamoor prospect:

The Company plans to continue to work on the Queensland Manganese Prospect in 2020, for which EPM has received all government approvals.

Though EPM is focused on increasing shareholder wealth with the exploration for and development of its existing asset base, Eclipse Metals also continues to seek additional prospective projects for further value generation.