Calls are Louder for Tax Reforms: Income and GST

If reforms are lacking in Australia, they are perhaps tax reforms. It has been over twenty years since a major tax reform in the country. In July 2020, the Goods & Services Tax (GST) completed twenty years, but policy thinktanks are demanding reforms far-reaching than just GST.

Although GST reform has been a debatable subject, there are opinions on stamp duty, payroll taxes, income tax, corporate tax rates, etc. Since tax reforms are politically sensitive legislation, the ruling government and opposition usually take a cautious stance.

At this point, the crisis has opened a range of opportunities for Australia, albeit challenges of similar or higher scale. But reforms are usually forced at times of distress, and some of such reforms also find a place in history.

COVID 19 has accelerated many things, including growing tensions with China; however, China has been engaged in conflicts with many nations now. As a large trading partner of China, Australian policymakers may need to look long term and plan accordingly.

It becomes imperative for governments to test or enhance the debt repayment capacities of the nation and promote responsible public finance mechanism. Also, billions of dollars of policy initiatives in the wake of COVID 19 pandemic need to be repaid, thus maintaining ratings on respective sovereign papers.

Beijing’s control over Hong Kong has indeed ignited a competition among other regional financial centres. Sydney should not pass the opportunity since Australia is equipped with relevant infrastructure needs and capacity, including law & order, education, skills, and political stability.

Even if the Australian Government were to move for a comprehensive tax reform, it should take considerable time until implementation, and consensus among political parties will be a prime precursor for a smooth implementation.

Taking excessive debt also means that the future generations of the country will have to repay that debt, ultimately by paying taxes. The Tax and Transfer Policy Institute (TTPI), Australian National University, has recently presented its view on income tax reforms.

The authors of the report argued that current savings tax system in the country is complex and is a driver of intergenerational inequality. They are proposing a new system with a new tax on savings at relatively lower rates – separate from taxes on labour income.

In this dual tax system, the authors demand:

It was acknowledged that tax reforms remain politically contentious and lobby groups defend some savings arrangements. The authors suggested that dividend imputation systems should be replaced with a flat tax on dividends, and stamp duties should be removed.

A Higher GST with a Broader Base

After completing twenty years, the noises are much louder now to amend the existing provisions of GST and its base of taxation. At the same time, potential amendments in indirect taxes of the country will attract massive attention and debate from voters as well as opposition.

Increasing GST could have immense benefits for governments, said PwC in a recent report on GST reform. A broader base with higher rate could enable states to remove existing taxes like payroll taxes and stamp duties.

The report noted that GST receipts have not kept pace with broader activity after the Global Financial Crisis (GFC), and collections have not reached pre-GFC levels. This is partly because people are spending more on goods and services that are exempted from GST, including housing, healthcare, education, food, financial services, and childcare.

The report highlighted that increasing the tax rate to 12.5% from 10% could generate additional collections between $14 billion to $40 billion. 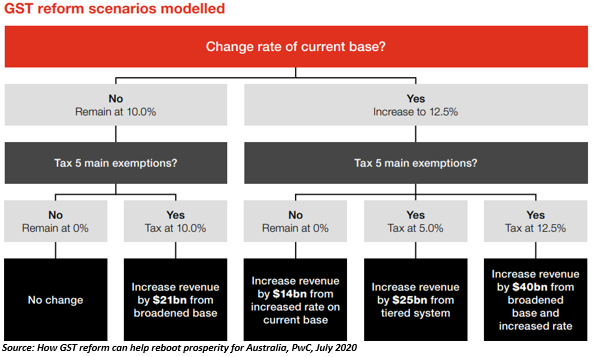 The firm acknowledged that GST reform will impact the lower income households since more income will be taxed, therefore potential reforms must need an equitable mechanism like compensation. PwC also suggested different rates on luxury items, differentiating types of education, and removing exemptions on financial services.

A Long Way to Reforms

It is highly unlikely that major tax reforms would be implemented at a time when the country is fighting recession after decades. Also, a lot of debate would need to be sorted at the Parliament for comprehensive reform.

Do Read: Bells ringing around a Technical Recession for Economies across the Globe

CLICK HERE FOR YOUR FREE REPORT!
Tags:
Income and GST