In June 2020, Australian CPI dropped by 1.9%, putting the country into deflation for the first time in 22 years. The quarterly slump in June was the largest drop in the past 72 years since the country started to record CPI.

ABS data revealed that the drop in CPI took annual inflation to minus 0.3%. The last time inflation went into the negative territory was in March 1998. 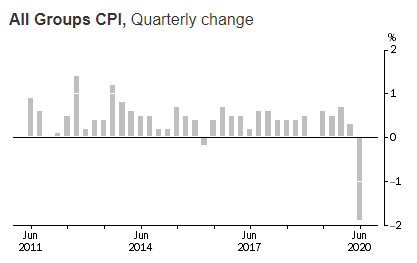 CPI measures the average cost of common household goods and services, along with fuel, education, childcare cost, and household appliances. CPI also tracks the fluctuations in their prices.

The current drop in CPI is associated with the Australian government’s decision to subsidise childcare prices in the initial days of coronavirus outbreak. While childcare costs declined 95% driven by support packages that made childcare free for essential workers, petrol prices and preschool costs were down by 19.3% and 16.2%, respectively.

CPI would have increased by 0.1% in the June quarter if the above-mentioned segments were excluded, and the drop was the third time that annual inflation went negative since 1949, as per Bruce Hockman, Chief Economist at ABS.

Although prices for a few goods dropped slightly, ABS noticed that for certain products it went up, partly due to panic buying by consumers, and as a result of households spending more time working and relaxing at home.

While cleaning and maintenance products increased by 6.2%, toilet paper and furniture prices rose by 4.5% and 3.8%, respectively. Food prices overall posted the biggest annual rise since 2011, though, vegetable and beef prices fell by 1.4% and 1.1%, respectively.

Takeaway and fast food prices increased by 0.8%, soft drink and food prices lifted by 2%, and there was an uptick of 6.1% in the price of other cereal products.  Audio, visual and computer equipment prices were lifted by 1.8%, which is also, the first quarterly rise since 2015 in this market. The Bureau claimed that the rise was attributed to an increase in TV usage.

Furniture prices rose 3.8%, and major household appliances increased by 3%. ABS noted that high demand of several items witnessed a drop in specials, and genuine price rose on an array of of long-life food items such as canned tuna and canned meat, rice, and pasta.

All capital cities reported a drop at All Groups level, ranging from Adelaide to Darwin at 1% and 2.5%, respectively.

Residential rents have plunged to new lows during coronavirus pandemic. As per the CPI data, national rents dropped by 1.3% in the June quarter, and rental yields have slid to record lows.

Cameron Kusher, REA Group’s Director of Economic Research, stated that results have revealed how COVID-19 situation has altered the dynamic of the property market. With no migration, the new stimulus that promotes buying from first home buyers who would be renters otherwise, and high unemployment has impacted everyone, especially the younger people.

However, he noted that with a moratorium on rental evictions intact till September, next quarter is not likely to witness rental CPI fall as harshly. Hence, the rental rate will drop further and will take some time to recover. Soaring demand on REA Group Limited (ASX:REA) realestate.com.au business segment is expected due to the likelihood of finding cheaper and better rentals, as shown by CPI data.

Sarah Hunter, Chief Economist at BIS Oxford, stated that rents could drop further in Sydney and Melbourne, where the loss of demand from international students combined with new supply has been applying substantial downward strain.

Slipping into deflation good or bad?

Deflation is a decline in the general price level of prices of goods and services in an economy. A general fall in prices is good as it increases the purchasing power of consumers and allows them to consume more, promoting economic growth and stability. However, swift deflation under particular circumstances can be related with a temporary contraction of economic activity.

Justin Smirk, Senior Economist at Westpac, has stated that the June quarter results reflect a deflationary beat to the Australian economy, which is expected to continue while commodity prices like crude oil stay low. Despite several shocks that are expected to be reversed, the coronavirus induced shutdown shifted the perceived signs of recovery to a wider mixed result again in the third quarter with indications of an ongoing deflationary pattern in several series.

Westpac anticipates Q3 of 2020 to rebound by 2.1% as economic strains persist to ease.

Experts believe that sustained deflation can be one of the greatest economic dangers. Falling prices can persuade people to put off expenditure in the belief that things will get even cheaper with time, making the economic slump worse. Further, a drop in prices can make it tougher to pay the debt that people have, as the debt value goes up when prices are falling.