Australia-based minerals exploration and development company Gold Mountain Limited (ASX: GMN) is exploring for gold and copper in the highly prospective Papuan Mobile Belt, Papua New Guinea (PNG), an attractive destination for mining investment with one of the highest densities of Tier 1 gold-copper projects in the globe.

Papuan Mobile Belt is host to many world-class deposits, including

For GMN Overview, Do Read: Gold Mountain Seeking to Create Shareholder Value through Flagship Project in Heart of PNG.

The current focus of the Company is on the exploration and development of its Flagship Project, Wabag Gold Project, which lies just 70 km ENE of the Porgera gold mine, in an identical geological setting. With access to key services like road link to coast, road to main GMN exploration camp, power, water, airport and mining support services, and strong mining labour force, GMN expects to make exceptional gains from the flagship project in PNG.

On the basis of results to date, GMN’s Flagship Wabag Project has multiple high-calibre targets, each of which has significant potential.

This target demonstrates a strong coherent Cu-Mo-Au in-soil signature, with a well-defined envelope of low Zn and Mn coincident with the Cu-Mo-Au anomaly, which is a substantial anomaly with a diameter of 1,200 m and covering > 1.35 km2. 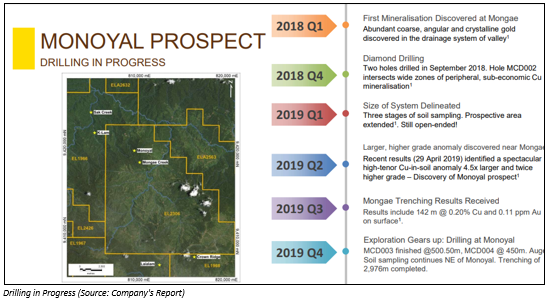 The Company recently completed drilling of the first hole, MCD003, at the Monoyal copper – porphyry prospect, approximately one km northwest of Mongae Creek where two diamond holes (MCD001 and 002) were drilled by GMN in the year 2018.

Apart from the current 9-hole drilling programme, planning and designing for the additional holes to cover a larger area at Monoyal are underway with a view to assess the extensive copper in soil anomaly.

GMN is emphasising on the continuous analysis of the results from the current programme in order to identify the final location for the planned holes. Moreover, GMN is actively pursuing a regional exploration campaign alongside the highly prospective structural corridor extending from Mongae Creek to the Mt Wipi area, subject to an Exploration License Application.