There is little doubt that the non-fungible token (NFT) category within the cryptoverse is buzzing with activity. Regardless of the dip in prices of cryptocurrencies this year, people seem to be not losing interest in cryptos’ close cousins, NFTs.

The NFT buzz reflects in new launches since the start of this year. ApeCoin (APE) crypto is linked to the BAYC NFT ecosystem, and the token’s release in March sparked a buying frenzy among enthusiasts. BAYC is a popular NFT collection, representing 10,000 unique artworks, and this was likely the only reason why the APE token doubled on its debut.

This was followed by singer Madonna launching digital assets on SuperRare, tennis player Coco Gauff unveiling her NFTs on Autograph, footballer Cristiano Ronaldo entering into a deal with Binance to endorse NFTs, and actor Keanu Reeves extending support to digital artists. The latest additions are the thunderous launch of two marketplaces -- GameStop, and LimeWire.

But have NFTs of this year been as profitable as some of the assets launched in previous years? The answer is ‘no’. Madonna’s NFTs could not fetch high bids, and LimeWire’s Originals collection is not selling at prices that can match that of BAYC or CryptoPunk. In this light, and amid renewed NFT space activity, let us explore the top NFT artists by their assets’ sales volume.

Beeple is a name to reckon with, having a cumulative artwork value of hundreds of millions of dollars, according to estimates. Beeple’s digital collage, titled Everydays, was bought at a Christie’s auction in 2021 by an NFT enthusiast for a whopping US$69.3 million.

Beeple’s other notable and highly priced works include HUMAN ONE, a video sculpture, and CROSSROAD, a short clip. Beeple was picked by singer Madonna to raise funds for charity by releasing NFT assets. 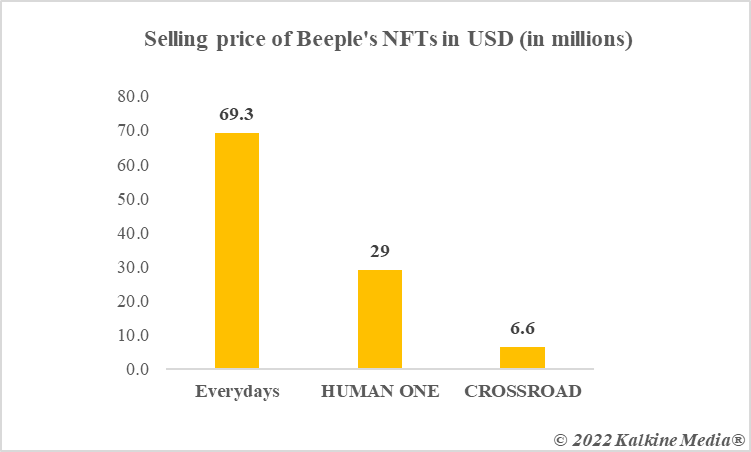 Pak is said to be not only an NFT creator but also an avid crypto investor. His creations have been sold on marketplaces such as Sotheby’s and Nifty Gateway. Some say that Pak introduced Beeple to digital assets.

The total artwork value of Pak is estimated to be more than that of Beeple’s. However, Pak’s average sale price is quite less compared to that of Beeple’s creations. Pak’s Clock NFT represents a timer on Julian Assange’s incarceration. Clock NFT was the saving grace of NFTs this year. It was reportedly purchased for over US$52 million in February.

Unlike Pak and Beeple, Hobbs does not use a pseudonym. He is famous for his “Fidenza” collection, which houses 999 assets, according to OpenSea. The collection is described as a “generative algorithm”, and the floor price on OpenSea is mentioned as 102.5 ETH, as of writing.

It was reported that #313 from the Fidenza NFT collection sold for nearly US$3.3 million in August last year.

The list of the most expensive NFT assets has nearly all sales concluded before the ongoing year. Despite names like Madonna, GameStop, and LimeWire, this year has so far remained dull in terms of price.