Crude oil prices rerouted on the rebound journey after falling marginally on the concerns of the second wave of coronavirus. The boost to the oil future price came from Saudi Arabia, the world second largest oil producer second only to the United States, pledged further oil cuts in June. The additional supply cut was unexpected by a major producer and not by OPEC+ or OECD countries but it did reignite the recoil.

Such voluntary supply cut measures may be followed by other oil producers to fasten the recovery of oil. In addition, UAE and Kuwait pledged to a combined cut of another 0.180 million barrels per day. 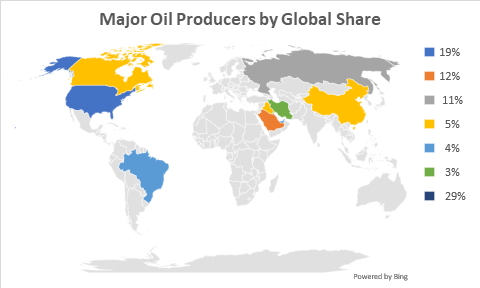 Saudi Aramco out of sorts, suffers 25% decline in Earnings

Saudi Aramco, one of the most profitable and largest company by revenues posted a decline in the net profit to US$ 16.63 billion. The Saudi Arabian major stated that the shareholders payout will remain unchanged at US$75 billion for the entire year.

The company has announced a dividend of US$18.75 for the first quarter and registered a strong cash flow of US$18.75 billion. The net profit reported is inclusive of Zakat, a religious obligation as per the Islamic law and the taxes. Even a 25% decline keeps the company’s dividend payout as the largest in the world.

Oil Economies no where to go

Saudi Arabia announced suspension of the cost of living allowance for state workers to strengthen its financials which had been adversely hit by the low oil prices. In addition to the suspension of the allowance from June 1, the value added tax figures have also been tripled to 15% effective from the start of July.

The Saudi Arabian economy remains under immense stress due to sole dependence on oil. Other economies including Iran have been reporting massive budget crisis as the governments face shortage of capital leading to severe economic crisis in these countries. The World Bank expects a negative growth of 9.7% in the Iraqi economy this year.

Oil versus Gold: What is Glittering today: Must Read

All Eyes on Oil Stocks: Increasing Demand may Ease Pressure on Inventories

These supply cuts would ease the pressure on the crude storage capacities worldwide, which were filled in the wake of low crude oil price to support the demand. As many economies such India is expected to end lockdown by mid of May and with phase 2 of lifting of lockdown restrictions in portions of Europe may further strengthen the global demand.

The increase in demand is expected to slow down the increase in the inventory. The US EIA is expected to release the data for the first week of May which will confirm the actual changes in the stocks. Although, the chances of a decline in stocks is minimal but if in case it happens, would immensely push the crude oil prices further.

With the demand toppling, the oil producers in the states of Texas and North Dakota, the two largest oil producing states, struggle to survive. Small Upstream players lost substantial sums when the WTI benchmark prices plunged to sub-zero levels.

With depleting demand and the refiners already operating refineries at reduced utilization rates, denying to exchange oil contracts on the New York Mercantile Exchange led the US oil benchmark WTI to go cross ~US$(35) a barrel, first time in the history. The market saturation and demand evaporation together proved to be double whammy for the junior oil players losing out millions of dollars on a single day.

The New Normal May Alter the Demand Pattern Permanently

With extended lockdown and quarantine measures across almost all parts of the world, several mega conglomerates have come out with plans to base a growing employee’s proportion to work from their home. The work from home opportunity has been tested by companies from IT, Financial services, Insurance and others with some of them already pleased with the results to permanently locate a major share of their workforce from home in the future. While this might be profitable to these companies to cut costs on rent and other employee related expenses but decreases the mobility and travel requirements. In addition, the global citizens are now adapting to stay indoors and may persist even in the upcoming future leading to a major permanent disruption in the oil markets.

Several economies such as China and South Korea have started facing the successive waves of coronavirus outbreak and may further decrease the demand from the so-called recovered economies.

The lifting of lockdown and easing of oil stocks globally will push the oil demand and support the crude oil prices which have been struggling. The fate of the oil based economies is in the hands of the oil mongers such as the US, China and India, the three major oil consumers.