The global crude oil demand has experienced healthy growth with the onset of May. The virus outbreak in China in January saw almost the entire world coming to a halt by mid of March, in addition, further indecision among the global economies to come to a resolution on timely oil supply cuts further added to fuel to the flames. A decrease in demand followed by a reduction in supply would have efficiently mitigated the oil situation and probably, would have saved the WTI crude oil benchmarks from the sub-zero levels and prepared for a “V shape” recovery. Will the oil markets still observe a “V shape” recovery? Let us see. 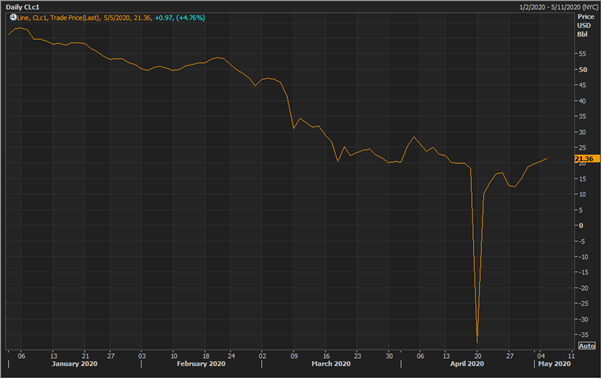 US Oil Producers take the matter in their own hands, cuts supplies

Amid the US China escalating tensions oil seems to find its safe place riding on the back of the voluntary production cuts by the US firms. The US government and the OPEC have proved to be ineffective in taking measures with rising oversupply situations and the prolonged oil price war between Saudi Arabia and Russia now, the global economies came together in April to agree to a supply cut effective from 1 May 2020.

The US had earlier made a stern statement warning Iran on the Strait of Hormuz, which handles the majority of the Asian oil flows. The voluntary production cuts by the US producers indicates lesser output which partially solves the filling up of the oil storage, especially at the Cushing, the home to the Western Texas Intermediate oil benchmark. 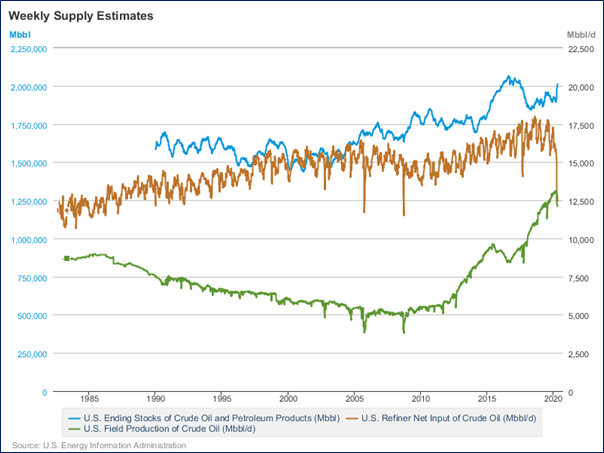 The domestic oil production reduced ~7% by the third week of April and is expected to further fall down in the further days.

Along with the reduced upstream capacity and slowing demand, the downstream sector had supported and reduced its utilization rates for the available capacity. The US refineries now operate at only 69.6% of their operable capacities against the operable utilization rates of 87.3% almost a month ago.

New Round of US China Tensions

The fresh round of tensions between the United States and China sparked off when US President Donald Trump stated that he believed the Coronavirus outbreak to be a result of a “horrible mistake” by China. Adding fuel to the fire was the US secretary of State Mike Pompeo who was quoted saying that the new coronavirus originated from a Chinese laboratory and there is “a significant amount of evidence" for the same.

Earlier, Japan had announced to move its Chinese manufacturing facilities from China. The US president indicated disrupting the global industrial supply from China and imposition of a new tariff to penalise China for the poor handling of the virus, which turned out to be a pandemic.

The construction sites, factories and parks have been given a green signal while the school classes are not anticipated to resume until this September. The country still maintains a lockdown of travel activities between regions and the citizen are free to travel within their own regions. As more restaurants and pubs strive to make up for the extreme losses during the lockdown, the government has allowed them to operate only as takeaway operations for now.

Depending on the future counting, the European nation is expected to announce the second phase of lockdown easing this May. Similar, easing has also been announced in Spain, France and Switzerland. The relaxation may indicate the recovery of oil demand towards the normal levels. As the economies reopen, a spike in cases and increase in fatality rates continue to trouble the governments worldwide.

The traffic data, pipeline flows and the oil sales indicate that the oil demand slump is already past the worst phase and indicate a rise in the demand going ahead. Though several oil traders agree to the theory but have expressed their expectation of a not steep recovery but a prolonging one over a year timeframe to reach the previous levels.

The less than sanguine expectation is based on the reduced travel and transport by the people and even abiding to the newer lifestyle with fewer social contacts.

A comment by the Royal Dutch Shell’s CFO Jessica Uhl, “major demand destruction that we don’t even know will come back,” at the company’s earnings call has also indicated the jeopardy of the future. The company announced an interim dividend of $0.16 per “A share”, almost a third of the last year’s values. The oil major announced a dividend cut for the first time in the last 70 years or so. This dividend cut reduced the payout to US$5 billion against the US$15 billion last year. The higher dividend always attracted the shareholders for a stabilised income on their investments, a reduced payout diminishes investment possibilities for such investors. The dividend cut is also being perceived as a move to cut down the debt and prepare for a leaner balance sheet which is less susceptible to downturns in the oil prices.

Similar dividend distribution policy can be expected from other oil majors which are yet to announce their March quarter’s performances.

An expected 30 million barrel a day dip has been estimated during the worst phases of April from the previous oil demand of around a 100 million barrels a day. The “V shape” which was earlier being stated by the experts is unlikely to follow suit as the oil demand continues a gradual and steady growth phase from the extremely troubled times.

A phase of reduced supply for the next upcoming weeks is expected to deplete portions of the oil stocks worldwide and resumption of increased activities in other major economies. With the newer geopolitical situations such as the one related to China is anticipated to persist for the upcoming months, but we are back on track for the recovery.