Crude oil prices and Gold have something in common in the recent times, both have been immensely volatile. Gold on the banks of the weak economic situation, pandemic outbreak, and weak equities market, while Crude oil is making to the news as “THE COMMODITY” which has plummeted cataclysmically due to the subdued demand and rising inventories of oil globally.

The oil story started with sharp decline in the crude oil demand as the major economies globally announced nation or region wide lockdowns due to the coronavirus outbreak. The first major lockdown came from China, the original epicentre of the pandemic. By February, the virus had spread to the European countries with Italy, Spain, France, Germany, and the UK being affected the worst.

The oil had been facing a supply glut situation since the past year. In March, the OPEC+ nations, failed to reach to a resolution to cut down the oil production throughputs. As a result of which Saudi Arabia announced a oil price war by increasing the oil production to around 12.5 million barrels per day levels, an increase of almost 1.5 million barrels per day to target Russia which had earlier denied to the supply cuts.

The oil price war ultimately backfired on the Saudi’s allies, as the US government continued to buy domestic crude oil to maintain the demand levels and support the Texas and North Dakota oil players. By the end of March, the World’s largest democracy with almost 20% of the global population entered into a nation-wide lockdown. Yes, we are talking about India, which is the third largest oil monger. In addition, the transport, travel ban globally dragged the demand for oil downwards. The sudden demand slump came as a shock to oil companies and succumbed to the declining crude oil prices.

But the worst phase was yet to begin, with the onset of April came the first major bankruptcy in the US, Whiting Petroleum which is North Dakota’s largest oil producer filed for chapter 11 bankruptcy. The US government seems to have underestimated the crisis and started pushing for a resolution of the Saudi Arabia and Russia spat. The oil inventories across the US had already been filled to sufficient levels and a further increase in stocks would have been extreme for the oil prices.

The Western Texas Intermediate (WTI) fell to the sub-zero levels on 20 April 2020, the day of the expiry of the future contracts. The oil futures are invested by both traders and oil refiners but as the date of expiry approaches, the contracts exchange hands and ends up with an oil downstream player. With almost no demand, oil refiners declined to buy excess oil, leading to the oil prices reaching values over ~US$(35) a barrel for the first time in the history. OPEC+ nations took notice of the situation and agreed to cut down the oil supply by around 9.5 million barrels per day, effective from 1 May.

Though the oil prices have shown recovery offering a return of about 10% in the past 30 days. In the midst of uncertainties, Gold continued to grow and with the additional effect of the weak Australian currency, with the prices rising to the record levels of over A$2,700 mark. Gold offered a return of over 6% in the past 30 days and a return of 12.4% for the year to date. In comparison, the Brent crude oil still trades around 60% lower during the year as of 30 April 2020. Gold has offered a steady growth pace in the recent years and beats all major conventional investments behind by offering excellent gains.

The WTI crude Future oil traded at US$23.99 a barrel on 8 May 2020. The Brent crude oil benchmark Future also reflected a similar recovery in oil prices at US$29.90 a barrel. We believe the crude oil producers might continue to operate at lower supply rates, giving appropriate time to the oil stocks to deplete and the demand to rise.

Gold traded at A$2,624 an ounce on 8 May 2020, shining heavily but there still remains the question for how long gold will continue to grow. 2019 saw the best of the US China trade war and the troubled economic conditions globally, supporting the gold prices. 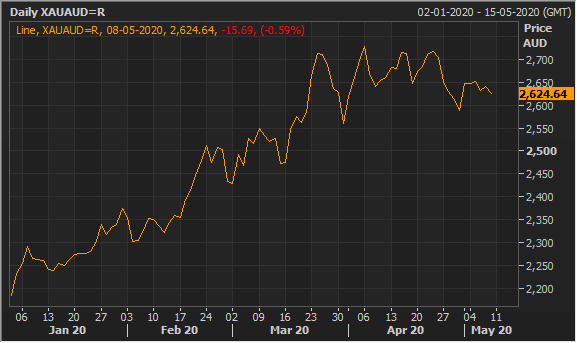 Gold side of the Story

The coronavirus outbreak motivated the institutional investors to switch from their respective conventional equity investments to Gold. The pandemic observed a bull run in all major precious metals. Due to the lockdown in both China and India, physical demand of gold experienced sharp declines, only to be offset by the record level demand in gold ETFs.

The gold backed ETF holdings rose to the record levels of 3,185 tonnes, attracting a huge inflow of over 298 tonnes of gold. The central banks continued to garner large volume of gold resulting in the reserves growing by 145 tonnes. Watching the gold prices exceeding to the record levels has left the world amused and also equivocal on future prospects of gold. Russia has announced suspension of long term buying of gold indicating signs of major slowdown in gold buying.

The rising gold prices have attracted the individual investors to make use of the situation, recording increasing levels of recycling of gold. Due to lockdown in all major economies, the recycle operations halted along with the suspension of mine productions leading to severe supply disruptions.

Once all major economies including India lifts up the lockdown restrictions, a spike in supply of the yellow metal can be observed leading to a transient fall in the gold prices, thus stabilising the precious metal prices.

There is no doubt that Gold has outshined all other investments including crude oil, but will it continue the bull run, that is to be watched. Crude oil has already made significant recovery and once lockdown situation eases up, a strong surge in demand will strengthen the commodity.