Silver prices have been emerging as the darling commodity with returns even outperforming gold on a six-month basis.

The investing community on the global front is now eyeing silver over the emerging supply disruptions and robust demand for the white metal. 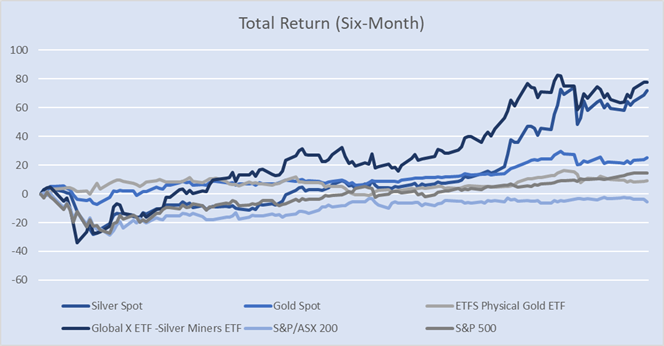 Over the last six-month, the silver spot has relatively outperformed every major asset class with an impeccable total return of 71.89 per cent.

A strong rally in silver has further improved market sentiments around silver mining stocks across the globe with some silver miners even outperforming the silver spot. The same could be inferred by strong studying the total return delivered by the Global X Silver Miners ETFs, up 77.58 per cent, which follows the Solactive Global Silver Miners Total Return Index.

Silver on a Daily Chart

On following the long-term daily chart of the silver spot, it could be seen that the commodity has corrected over 78.6 per cent of the previous rally before the recent momentum. As per Fibonacci retracement observations, the levels of 78.6 per cent usually attract bulls.

In the case of silver, post the correction to the level of 78.6 per cent, the silver spot picked momentum to break the horizontal resistance level at ~ USD 20.8394 and entered an intermediate uptrend. The horizontal breakout line could act as a major support for the commodity.

Furthermore, in the recent past, the silver spot has given and confirmed a breakout of a symmetrical triangle formation on the daily chart, reflecting on the end of a consolidation phase, which could further seed bullish sentiments ahead.

On applying the Ichimoku Kinko Hyo on the daily chart along with some momentum-based technical signals, it could be seen that the current setup looks bullish in nature; however, with increased volatility, the risk of whiplashes are getting high, which would require close following of such momentum-based signals to gauge the market mood.

Silver on a Weekly Chart

However, during the consolidation phase, the weekly chart contoured a bullish setup with the emergence of two outside bars, i.e., days of large volatile trading, followed by two inside bar and a high breach of the inside bar.

The emergence of two outside bars reflected a large exchange of the commodity and intense competition between bulls and bears, leading to heightened volatility. However, post that, the market took a breather with two weeks of consolidation (as reflected by two inside bar), and after the consolidation, the last weekly candle broke above the high of the previous inside bar, reflecting that bullish sentiments are once again taking surface.