Brent crude oil prices are climbing the price ladder on the back of declining production across the United States due to extreme cold weather conditions across Texas, one of the largest oil-producing regions across North America.

The oil traders are responding well in the wake of declining production and depleting oil stockpiles across the United States. For the week ended 12 February 2021, the United States weekly oil inventory declined marginally once again by 6.6 million barrels, taking the total stockpiles to record low since March 2020 at 469.0 million barrels (excluding strategic petroleum reserve). 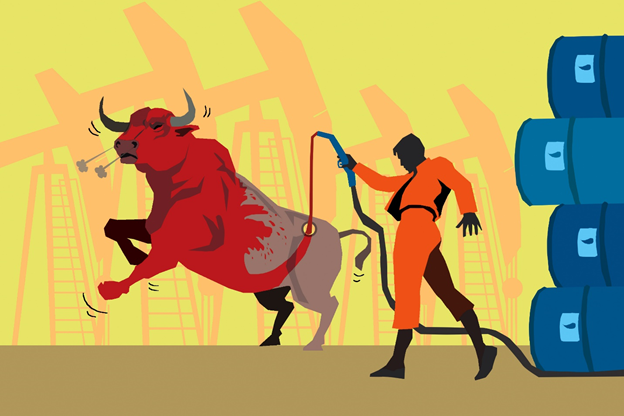 Meanwhile, the consumption of oil products is inching up across the United States. As per the data from the United States Energy Information Administration (EIA), the U.S. weekly crude oil refinery inputs averaged 152,000 barrels higher for the same period to stand at 14.8 million barrels.

NG Takes a Push From the Texas Freeze

Apart from propelling crude oil prices, the unusual deep freeze spread across Texas is also fuelling the demand for natural gas, which is following suit with crude oil. While Texas generates a significant quantity of U.S. crude oil, the state itself is dependent on wind turbines and natural gas for energy generation.

Moreover, due to temperatures hitting sub zero levels even the wind turbines have frozen and the state is now highly relying on natural gas for energy generation to reduce the power outages, leading to a surge in demand for natural gas.

Apart from that, consistent lower oil production by OPEC and allies is also playing its part in propelling the crude market.

Also Read: How a rebound in oil prices is impacting ASX energy stocks

In the wake of a surge in crude oil prices and increased energy demands, investors might take interest in energy companies, and one such example has recently come into the limelight.