With a market capitalisation of approximately $50.15 billion as on 2 December 2019, Woolworths Group is one of the largest companies in Australia, recognised in various indices, including S&P/ASX 50, S&P/ASX 20 and more.

Blue-chip retailer, Woolworths Group released a statement to the exchange on 2 December 2019. The company notified that a Canberra Law firm had informed its intention to file an class action in the Federal Court of Australia in relation to the payment shortfalls to its team members.

The group believes that the class action in relation to payment shortfalls lacks merit, and it would fully defend the proceedings. In late October, the group had informed that there had been payment shortfalls to team members covered by General Retail Industry Award.

It was said that the retailer remains committed to fully rectifying all payment shortfalls to current and former salaried team members across the group with interest, superannuation contributions.

In this regard, it was clarified that the group would be making interim payments before Christmas to the affected and salaried staff members and former salaried store team members of Supermarkets & Metro stores for the period of two years, starting from September 2017 to August 2019.

Presently, the group believes that their commitment to providing the team members with arrears in payment means that the class action proceedings lacks merit and would be vigorously defended by the Group.

In October, the markets woke up to reality when the retailer notified that around 5.7k team members had been affected by the underpayment under the General Retail Industry Award. These team members were working at the Supermarket and Metro stores.

It was mentioned that the annual salaries for store team members are designed to cover normal working hours and overtime. However, the team members are entitled to be paid above their prescribed entitlements or consistent with payment structure under the GRIA.

The group found that the time worked by the team members was not accounted in the individual salary settings for some salaried store team members. It was said that the retailers remain committed to rectifying the payment shortfalls while an extensive plan was in place to ensure compliance going forward.

The retailer also notified that the review program had been extended to all group businesses to ensure the compliance with salary obligations of the group. The group had estimated a one-off impact of remediation in a tune of $200 to $300 million before tax, and additional information would be provided in February 2020 during the disclosure of the interim results.

Under the group, there are over 145k team members who are covered by an enterprise agreement, and this review hasn't impacted these team members. It was said that presently, there are around 19k team members in the group who are paid an annual salary.

Those members who draw an annual salary were in the scope of this review which majorly included department managers at the store level. The retailer added that the current and former salaried team members are paid consistently to the contractual entitlements.

For extended review, the group said that extracting the required data across all businesses is anticipated complete by the end of the financial year. And, over eleven million individual records per year would be reviewed. It is the group’s intention to rectify the payment arrears as the review of each financial year is completed.

In addition, the group had reported the matter to the Fair Work Ombudsman, and external advisors PwC and Ashurst are supporting the review. And, the group have established a website for former salaried team members as well as for current team members. 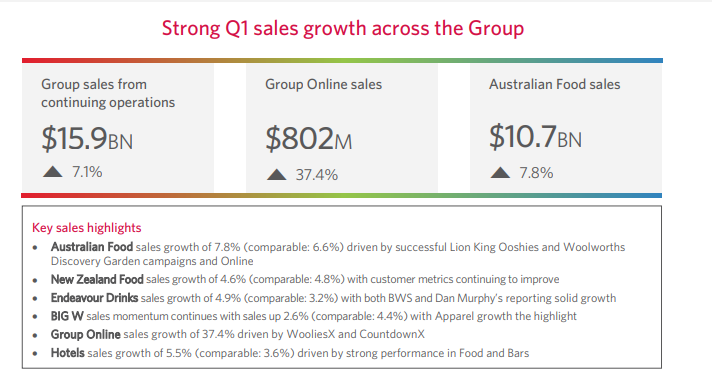 During 1Q, the average prices increased by 0.3 per cent in spite of fruit and vegetable prices returning to deflation, groceries continued to decline compared to pcp but at a slower pace. The highest rate of inflation was recorded in meat, deli and bakery due to drought.

In New Zealand Food, the group achieved a total sales growth of 4.6 per cent to record NZD 1.8 billion sales, and online sales continued its momentum with a growth of 38.4 per cent. The average prices increased by 0.5 per cent due to rising prices of meat and perishables. The group had a store count of 180 stores with no change by the end of the period.

In Endeavour Drinks, the group sales increased by 4.9 per cent in the quarter to $2.2 billion with a comparable sales growth of 3.2 per cent. The online sales continued its momentum with a growth of 20.7 per cent driven by growth in BWS and Dan Murphy’s. The division was operating 1,352 BWS stores with seven new openings along with one closure, and Dan Murphy’s was operating 230 stores by the end of the period.

In BIG W, the total sales increased by 2.6 per cent to $926 million with a comparable sales growth of 4.4 per cent. All customer universes except leisure delivered comparable sales growth with improved trading in Apparel. The online sales for the segment were strong but moderate as compared to the pcp with an increase of 21.2 per cent compared to 159.1 per cent in the previous year. The store count remained unchanged for the period at 183.

In Hotels, the sales increase by 5.5 per cent and comparable sales growth of 3.6 per cent over the pcp, driven by refurbishments, promotional activity and key sporting events. The Group was operating 328 hotels by the end of the period with no change.