As per recently released official stats by National Bureau of Statistics, Chinese monthly retail sales for the month of June inched up 9.8 per cent against the market expectation of 8.5 per cent; during May, retail sales grew by 8.6%.

However, quarterly GDP growth rate stood at 6.2%, in line with market expectation. However, this was the weakest rate recorded by the country in at least 27 years. The dip in growth from 6.4% recorded in the first quarter of 2019 marks the ill-effects of prolonged trade war between two global superpowers. 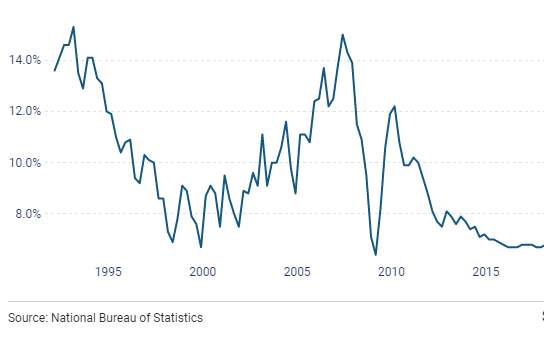 An eye on ASX stocks in green territory

Even junior players recorded massive gains on ASX today. Karoon Energy Limited (ASX: KAR) is trading at A$1.130, up by 3.2%. The company is an oil and gas explorer with projects in Australia, Peru and Brazil. It envisions to transform into a global E&P company with material production to underpin growth through a highly prospective exploration portfolio. It is eyeing to acquire full operating interest in Santos Basin off-shore Brazil concession BM-S40, which contains the producing Bauna light oil project. In an ASX announcement today, the company stated that it has presented the high bid in its acquisition auction process.

Over in the US, Hurricane Barry has passed through the gulf and has dumped life-threatening rain in Louisiana, which may impact oil production. The refining operations in Louisiana have been affected through the storm damage with a nearly 70 per cent cut in the crude oil production in the U.S.-regulated areas of the Gulf of Mexico. Investors may keep a close watch on the oil stocks that are likely to be affected with the tropical storm.

The Australian financial sector was also trading in the red zone, driven by a fall in the stock prices of all the big four banks of Australia - Australia and New Zealand Banking Group Limited (ASX: ANZ), Commonwealth Bank of Australia (ASX: CBA), National Australia Bank Limited (ASX: NAB) and Westpac Banking Corporation (ASX: WBC). Among all these banks, ANZ was performing the worst after the news came out of the bank’s New Zealand business facing a legal action by investors that have lost their money post the collapse of a Ponzi scheme in 2012.

The Australian dollar edged up to $0.7029 as the reported China’s quarterly economic growth figures was in line with what was expected by the market experts. The data gave a sigh of relief in the midst of rising concerns about global economic slowdown, strengthening appetite for riskier assets. As a result, the prices of gold and other precious metals slipped as the data stoked risk sentiment.