Graphite exploration and development company, BlackEarth Minerals NL (ASX: BEM), based in West Perth, had a momentous year to date. The company has made several significant achievements over the year, with focus on fast-tracking its flagship property, Maniry Graphite Project (100 per cent owned) located in a highly favourable location, Madagascar, which is a major graphite supplier to China, India, United States and other global consumers.

Marking a sound start to 2019, January saw BEM announcing positive scoping study results for the Maniry Graphite Project. The company transitioned from graphite explorer to developer with the study completion. 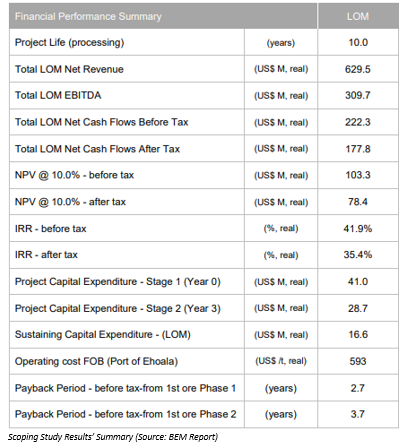 In February 2019, BlackEarth Minerals received high-grade assay results from trenching programs at the Maniry Graphite Project. The company believed that the significant discovery had the potential for conversion into an estimated mineral resource adding high-grade resource tonnes to its mineral inventory.

Ianapera is the second project of BEM in Madagascar, for which the company received broad, high-grade results from the initial trenching program in March 2019, highlighting the significant potential of the project. The company had also updated the market with an exploration target for the Ianapera project of 20-30MT at 10-20% TGC. This project is located within 10 kilometres of the world-class Molo Graphite project and 75 kilometres north of the Maniry Graphite project.

During the month, the company appointed Mr Simon Storm as the CFO and Company Secretary of BEM. Additionally, BEM closed the share purchase plan announced in February 2019, raising $1.08 million.

The fifth month of the year saw BlackEarth appointing Australia Minerals & Resources (AustMin) as the strategic offtake advisor in relation to offtake discussions/agreements, funding, product development and general collaboration for natural graphite, in relation to the Maniry project.

June turned out to be extremely crucial for the company, as it received test report results on concentrate from the Maniry project, indicating that the BEM flake graphite is suitable for the application in the refractory industry and for many other applications. Additionally, the results highlighted that the flake graphite is well suited to produce high demand expandable graphite, and relatively simple purification of the concentrate could yield even higher expansion volumes.

During June 2019, BEM held strategic discussions with Madagascan Minister of Mines and Strategic Resources, Mr Fidiniavo Ravokatra, securing the support of the department of mines towards fast tracking its flagship Maniry Graphite project.

BGRIMM or Beijing General Research Institute of Mining and Metallurgy is a globally recognised technical leader in graphite processing and engineering, which was appointed by BEM in October 2019 to conduct final testing - a 2-stage 60-70 tonne large scale pilot metallurgical test program - on Maniry graphite ore. The company, in October only, dispatched graphite concentrate samples from the Maniry Graphite Project to potential Chinese offtake partners.

Positive results from graphite concentrate samples from the Maniry project have enabled BEM to aggressively progress offtake discussions for the Maniry Graphite Project.

Recently, the largest expanded graphite products producer on the global level reported excellent quality and expansion rates from testing on the coarse flake graphite samples of BEM. Moreover, the producer expressed willingness to work with the company, targeted towards meeting high-end specification needs on a long-term basis.

On 5 December 2019, the stock of BlackEarth Minerals inched upward by 12%, after the company released an update on testwork and offtake partner agreements.

2019 has been a busy and extraordinary year for BEM, as the Madagascar bred and Australian born company achieved several significant milestones, getting closer towards its target of completing Maniry Project feasibility study during 2020 and starting project commissioning in 2021.

Tags:
Mining ASX: BEM
All pictures are copyright to their respective owner(s).Kalkinemedia.com does not claim ownership of any of the pictures displayed on this website unless stated otherwise. Some of the images used on this website are taken from the web and are believed to be in public domain. We have used reasonable efforts to accredit the source (public domain/CC0 status) to where it was found and indicated it below the image.