The US Department of Justice has given the regulatory clearance to Amcor Limited (ASX: AMC) for the proposed acquisition of Bemis Company, Inc. under a condition to divest Amcor’s three manufacturing facilities and other assets. The companies had earlier got unconditional antitrust clearance from the Administrative Council for Economic Defense (CADE) of Brazil in April.

The terms of the proposed settlement require Amcor to divest its manufacturing facilities located in Madison, Wisconsin; Ashland, Massachusetts and Milwaukee, Wisconsin. Along with this, the company must divest its certain related assets to US-based Tekni-Plex Inc., or an alternate acquirer permitted by the US.

Following are the expected key dates for the Amcor and Bemis transaction: 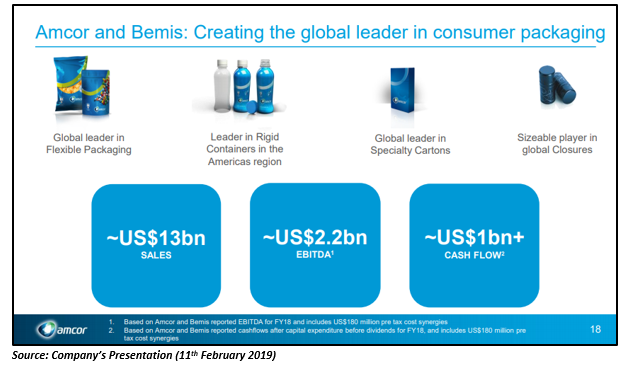 According to the US Department of Justice, the proposed acquisition would lead to the elimination of competition between two of the only three significant suppliers of three medical packaging products in Australia, without the divestiture.

The Department has complained that the combination of Amcor and Bemis would eliminate head-to-head competition between the companies as they both supply the three medical packaging products that are critical to the safe transportation and use of medical devices. This would also threaten the benefits realized by the medical care providers from that competition in the form of lower prices and better service.

Recently in April, Amcor announced a pro-rata FY19 final dividend of 12.0 US cents per share related to the period of March quarter following an announcement regarding a normal quarterly cash dividend to be paid to Bemis shareholders. The declared dividend was to be payable on 13th May 2019 with the record date and ex-date of 29th April 2019 and 26th April 2019, respectively.

Amcor’s half-yearly results for the half-year ending 31st December 2018 were announced in February this year. The company reported a statutory profit of US$267.6 million and an underlying profit of US$ 328.5 million during the period. 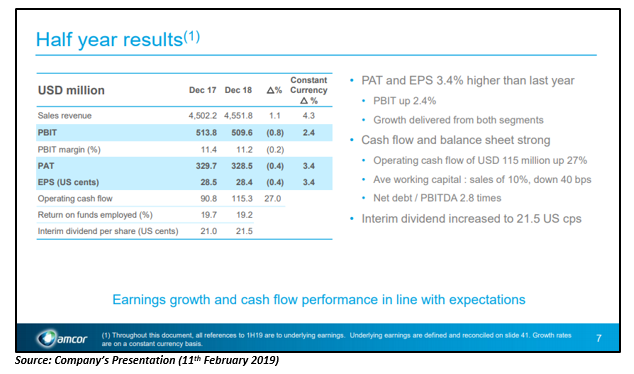 CLICK HERE FOR YOUR FREE REPORT!
Tags:
consumer AMC
All pictures are copyright to their respective owner(s).Kalkinemedia.com does not claim ownership of any of the pictures displayed on this website unless stated otherwise. Some of the images used on this website are taken from the web and are believed to be in public domain. We have used reasonable efforts to accredit the source (public domain/CC0 status) to where it was found and indicated it below the image.