Australia is on track to meet its target of lowering the greenhouse gas emissions to 5% by 2020. The government has introduced several climate change policies such as the Emissions Reduction Fund and National Energy Productivity Plan to bring the emission levels below 2000 levels by the target year, according to the Department of the Environment and Energy of the Australian Government.

However, there are several market reports, which claim that Australia would become one of the worst climate change contributors across the globe in the coming years, factoring in pollution from its fossil fuel exports. Expansion projects related to fossil fuel in the country seem to contradict the worldwide efforts of achieving the goal set by the Paris Agreement to keep a global temperature rise below a 2°C threshold.

By 2030, carbon pollution by Australia might be close to nearly one-fifth of the global greenhouse gas emissions, if proposed fossil fuel development projects such as the Carmichael mine of India-based multinational conglomerate Adani Group are taken into consideration.

Let us have a detailed look at Adani-owned Carmichael mine project:

Carmichael is located in the north Galilee Basin in Queensland, Australia. It is over 300 km away from the Queensland coastline and nearly 160 km north-west of Clermont. Carmichael would be the biggest coal mine in Australia. Moreover, it would be one of the 125 cola mines in the country However, Adani Group is facing huge criticism for the Carmichael coal mine project, owing to its environmental impacts. 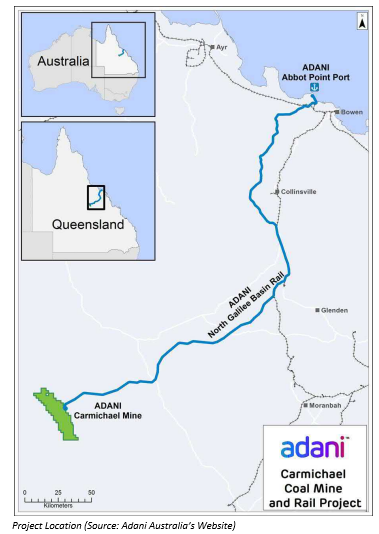 Adani Group was formed in 1988 and is considered as one of the leading business entities in India. The group has a revenue of more than $11 billion and is an international infrastructure player functioning through businesses such as logistics, energy and so forth.

The company bought the resource on a lease for 99 years in 2010 for ~USD 2 billion, after Adani Mining Pvt Ltd, which is the subsidiary of Adani Group’s Australian entity Adani Australia, reached a deal with the Australian government for the coal mine development project, entailing the construction of a thermal coal mine in the North Galilee Basin, in addition to a multi-user rail line spanning 388 km and connecting the mine site with Abbot Point Port.

While the company secured final environmental approvals from the Department of Environment and Science (DES) of Queensland to start work on the mine site in June 2019, based on its groundwater dependent ecosystem management plan (GDEMP). The project is set to open up a new mining basin in Central Queensland. In order to start coal extraction from the project, the company needs to obtain several other federal approvals as well.

Based on its GDEMP, the company has claimed that the project meets all the regulatory conditions set by the state governments as well as central government in the country. The company secured mining approval after waiting for nearly 8 years.

Backlash over the Project:

Opponents of the project have claimed that the Carmichael mine project is a risky financial investment. According to them, it is an unprofitable project due to the low-quality coal at the mine and the company would fail to make profit out of it. Thermal coal product from the mine site is believed to be closer to the lower-quality coal in Indonesia rather than the high-value coal available in Australia.

Moreover, according to the project opponents, the company should avoid the project, as the entire world is working towards lowering carbon emissions to prevent the ecological and economic impacts of climate change. Additionally, they are asking the company to make investments in renewable energy and move towards this clean, secure, efficient as well as affordable energy, which is an urgent need to reduce carbon pollution.

Meanwhile, Adani Group is under the spotlight from the government of India, as the company has a finance agreement worth $1 billion with domestic banks to commence the project.

Gautam Adani, the company’s chairman and founder, responding to the criticism, has claimed that the company wouldn’t have went ahead with the project, if it was unviable. He stated that renewable energy couldn’t alone meet the baseload power needs in India, which has per capita power consumption quite below than the global average. India needs more power to achieve its development targets. Though coal is the most-polluting fossil fuel, it still dominates power production in most parts of the Asian region.

Through the project, the company is aiming to contribute towards energy security in India as well as generate job opportunities including thousands of construction jobs for the locals in Australia. The project claims to have colossal long-term benefits to Queensland and workers, as it might deliver economic benefits to small businesses and result in the development of new enterprises.

The mine will result in billions of dollars for the government during its operations in the initial 30 years in terms of mining taxes and royalties. Moreover, funds received from royalties and taxes are expected to be directed towards aiding, maintaining and developing local services such as roads, schools and hospitals in Queensland.

For the first phase of the project, the mining conglomerate has already secured its board approval to produce 10 million tonnes on an annual basis. Coal output from the phase will be exported to the company’s power plants including Mundra and Godda in India. It expects first production from the project in the upcoming two years period.

The project, which is estimated to have a lifespan of 60 years, would have a peak annual production capacity of 27 million tonnes, which is nearly half of the original target of 60 million tonnes. Adani Group might consider selling washed coal to Japanese and Korean buyers as well.

Serious risks are expected to the environment from the project, owing to which environmental activists are opposing the project. Some of the project impacts are:

CLICK HERE FOR YOUR FREE REPORT!
Tags:
Adani Group
All pictures are copyright to their respective owner(s).Kalkinemedia.com does not claim ownership of any of the pictures displayed on this website unless stated otherwise. Some of the images used on this website are taken from the web and are believed to be in public domain. We have used reasonable efforts to accredit the source (public domain/CC0 status) to where it was found and indicated it below the image.